Scotland Part 4: What to See and Do in Edinburgh 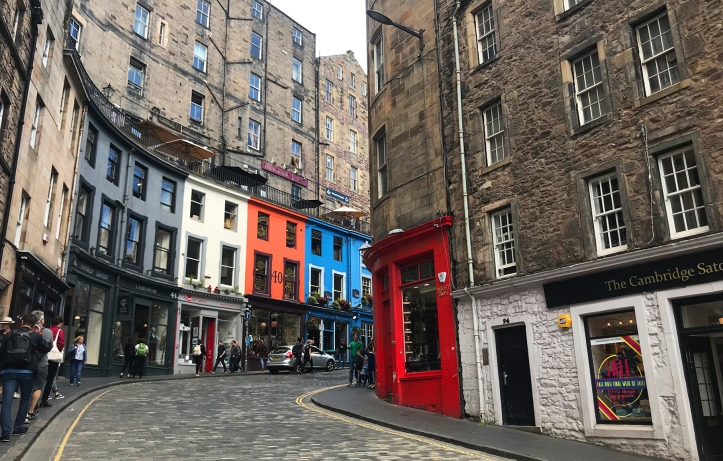 Our time in Scotland ended in the capital city of Edinburgh.  Steeped with medieval charm, the city’s skyline is distinguished by a sea of spires and towers that rise up from the labyrinth of cobbled streets in the its historic Old Town.  By contrast, the 18th century New Town is made up of a series of broad boulevards and open squares lined with high-end hotels, shops and pubs. Both areas make for an architectural feast that’s easy to explore on foot.

What to See and Do
After dropping off our rental car at the Edinburgh airport we hopped on the blue Lothian Airlink bus #100 for the easy 30 minute ride to the heart of the city near Waverly Train Station.  It was a Sunday so our first destination was the Stockbridge Market, a weekly market featuring stalls of street food and other artisanal goods.  Once we had our fill we wandered through the elegant street of the New Town, admiring the Gregorian buildings along the way.  Eventually we arrived at Calton Hill and walked to the top to check out its postcard view of Edinburgh.  While the late afternoon sun made for poor viewing, the National Monument of Scotland (an unfinished replica of the Parthenon) with Arthur’s Seat (an extinct volcano that formed Calton Hill and the surrounding area with activity dating back 340 million years) in the distance were worth the climb.

Later that night after dinner we found ourselves at the foot of Arthur’s Seat and decided to attempt the climb.  There are several different unmarked paths you can hike up that range from hard (steep) to harder (steeper), which are outlined on the map here.  Upon reaching the top we were rewarded with sweeping views of the city all around us, although the wind was so strong that we could hardly stand up (the rocks are also very slippery at the top so I would use caution in wet weather).

We started our next day early with a visit to the Edinburgh Castle.  This site is arguably the most popular in the city so we purchased our timed tickets for the first slot of the day to attempt to beat the crowds.  Admission includes a free audio guide which we skipped in favor of the free guided tour around the exterior of the castle complex, learning about its storied history as a military fortress, royal residence and prison.  Afterwards we made our way through the various buildings of the 12th century castle including the one that houses its crown jewels (the second oldest complete set in Europe that were used in only 4 coronations, the most recent in 1651), but left before the 1 o’clock gunfire as the castle had become quite crowded. 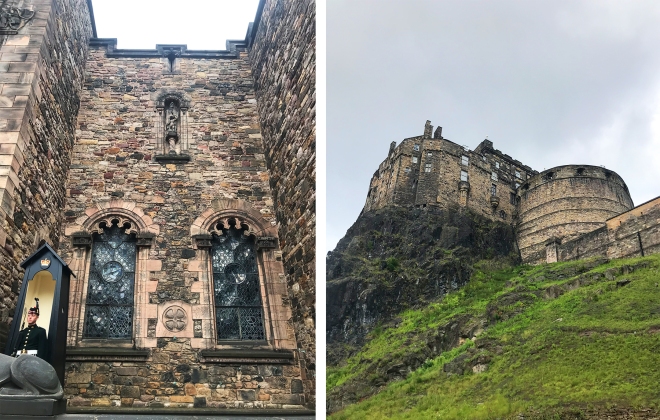 From here our walk began down the appropriately named Royal Mile, the city’s main road made up of 4 connecting streets – Castlehill, Lawnmarket, High Street and Canongate – that literally span a mile between the castle at the top and the Palace of Holyroodhouse at the bottom.  Today the street’s medieval buildings are mostly filled with touristy shops that attract a fair share of tourists, but if you look a little further there are many little hidden alleyways and squares (called closes and courts among other things) that offer a window into the Edinburgh of the past.  We also made a few other detours along the way to Grassmarket Square (a great spot for nightlife) and Victoria Street (the inspiration for Diagon Alley in Harry Potter) before stopping to go inside St. Giles’ Cathedral.  Edinburgh’s once Catholic-turned-Protestant church has seen a lot of action over the centuries – both architecturally and culturally – stripped down to play the stage for John Knox’s fiery sermons during the Reformation with some embellishments later restored thanks to the Victorians.  Its celestial blue ceiling and ornate Thistle Chapel are two highlights not to miss.

We ended our day with a too brief visit to the National Museum of Scotland.  The museum is free to enter and features an incredible collection spanning Scottish and world cultures, natural history, fashion, technology and more.  The building itself is worth a visit alone with its 3 levels that radiate from the beautiful 19th century light-filled Grand Gallery that was inspired by London’s Crystal Palace.  Overall we found the evenings to be quieter along the Royal Mile with generally less people (sans a handful of theatrical walking tours), and on our last night in Edinburgh we went ventured even further out towards Dean Village in the northwest part of the city.  This picturesque village was originally built in the 1880s as housing for local mill workers and retains its charm today with cobbled lanes, tangled gardens and the tranquil Water of Leith flowing through.  It was the perfect location for an after dinner walk.

Where to Eat
We arrived in Edinburgh on a Sunday so it was only fitting that we seek out a proper Sunday roast.  We had already been considering The Salisbury Arms (58 Dalkeith Road) and their Sunday menu in particular looked incredible.  This stylish Gregorian pub is an easy walk just south of the Royal Mile and Holyrood Park and its thoughtful décor creates a pleasant atmosphere.  We started out our meal with some gin-based cocktails and couldn’t decide between the beef and pork roast so ordered one of each.  Both were served with roasted potatoes, cooked greens, peas and Yorkshire pudding and to our surprise the portion size was reasonable and the food was delicious and not too rich or filling.  That meant we were able to clean our plates and still save enough room for dessert.  We took advantage of the small dessert with a hot beverage option – one cheesecake and one apple rhubarb crumble – which were also just the right size. 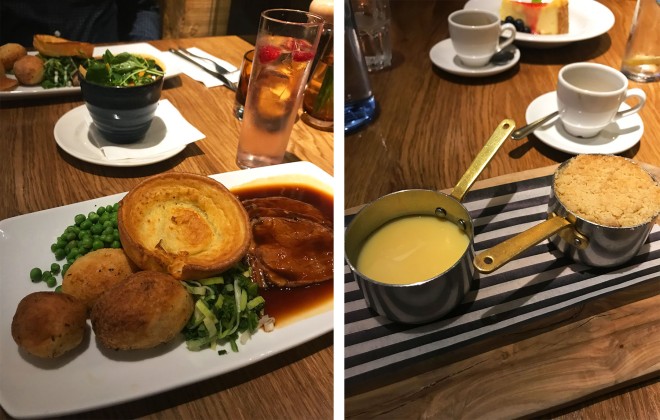 The next night I was looking for one more steak and ale pie before we left Scotland and in the absence of a solid plan that would deliver on that we decided to eat at the pub in our hotel The Inn on the Mile (82 High Street – more on that below).  The menu is straightforward with a good selection of classic pub fare that’s complimented by an impressive drinks menu.  I had the steak and ale pie that I hoped for and my husband opted for a burger with chips. We also ordered a flight of 3 gins (Kristy’s, Garden Shed and Old Curiosity), which as a non-whisky drinker I was happy to sample a good variety of local gins during our time in Edinburgh and around Scotland.

After dinner we walked a few minutes to The Devil’s Advocate (9 Advocate’s Close) for drinks and dessert.  It’s located off one of the many closes that step steeply down from the Royal Mile in Edinburgh’s Old Town, filling the cavernous space of an old Victorian pump house.  The bar boasts a list of inventive cocktails and more than 300 whiskies from around the world.  Since this marked our last night in Scotland my husband ordered one more whisky for the road (Cragganmore 12) while the bartender made me a custom take on the Under the Tuscan Sun cocktail sans rosemary.  Our malted chocolate and salted caramel mouse was to die for and the service was extremely friendly and top notch.

Where to Stay
Since we would be leaving Edinburgh via train our main criteria for a hotel was proximity to Waverly station.  We found that with The Inn on the Mile right on the Royal Mile in the heart of Edinburgh and only a 5 minute walk to the train station.  This small hotel has 9 spacious and stylish rooms and offers a ton of perks like a bottle of prosecco if you book direct, plus other goodies like welcome drinks, coffee and tea in the room and a special “tuck in” service upon request.  The ground floor pub where you enter and check in retains its former bank building charm and is a great place for an evening drink or quick meal.  We also took advantage of the breakfast option, which for a flat rate allowed us to order anything off the menu and enjoy the pastries, fruit, yogurt, cereal and other cold items from the continental buffet set up in the pub each morning.  The Inn on the Mile’s location was also super convenient for exploring other parts of Edinburgh as everything we wanted to see we were able to reach on foot. 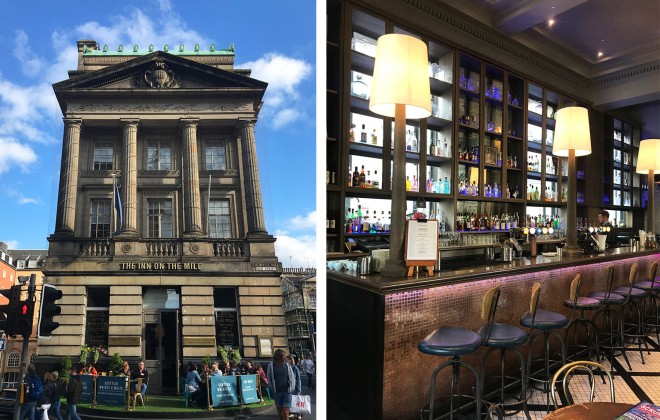 Inverness was the last part of our whirlwind trip around to Scotland.  Check out the map below for our full 7-day itinerary and read more about Inverness, the Isle of Skye and Glencoe!