Me Cumpari Turiddu
The food in Sicily is nothing short of amazing, and some of our most memorable meals were those we ate in Catania.  Me Cumpari Turiddu was our first introduction to Sicilian cuisine and was one of those places I kept reading about when planning my trip.  It’s the least casual of the 3 Catania restaurants I’ve outlined here (each with a different style but equally as enjoyable), but even so was relaxing and inviting.  As we stepped inside it felt more like an antique shop than a restaurant, with crystal chandeliers hanging from the ceiling, curio cabinets filled with ceramics and mismatched chairs and tables topped with lace doilies as placemats. 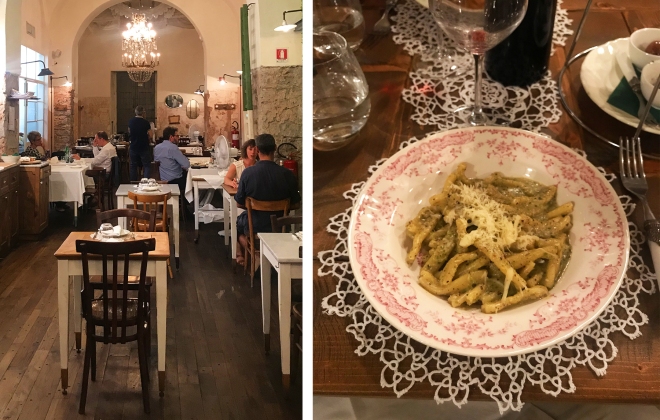 While its aim is to harken back to Sicilian roots, Me Cumpari Turiddu’s approach to food is anything but old.  Rather, it’s a fusion of traditional and new-style cuisine that’s grounded in seasonality.  Think grandma’s cooking but with a modern twist.  We started with a bottle of Etna red wine, which was accompanied by a plate of small breads to taste with olives and sun dried tomatoes.  Next we ordered pasta alla Norma – the city’s trademark dish made with eggplant, tomatoes and dry ricotta salata that is named after local composer Vincenzo Bellini’s opera Norma – and a pesto pasta dish, both which were cooked to al dente perfection with flavors that were pronounced but not overpowering.  Talk about making a great first impression.  It’s worthwhile to note that Mi Cumpari Turiddu also serves breakfast and has an accompanying bistro with smaller street food-like items and a tea room with sweets for mid-day breaks. 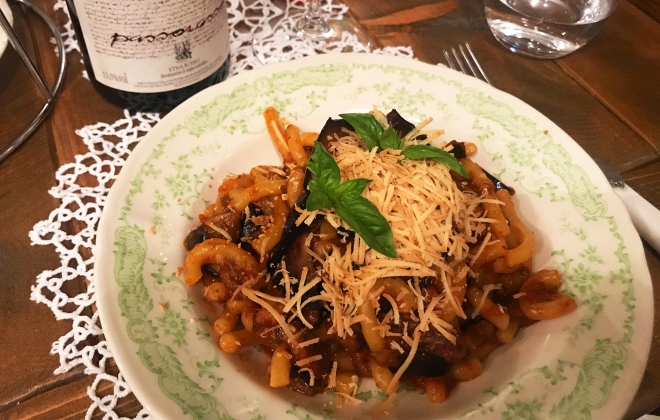 Sazi e Sani
After a day spent hiking to the summit of Mount Etna, the best possible way to celebrate our accomplishment was with pizza and Sazi e Sani did not disappoint.  This no-frills pizzeria was the most laid back place we ate in Catania, with casual seating inside and a makeshift patio built on top of a platform outside (a fitting setting given our exhaustion from the day’s events).  Settling into our table on the crowded patio, we started by ordering a beer and calice di vino, not a term I could recall seeing on a menu before but literally translates to “goblet of wine”.  Thereafter we ordered a delicious salad with grilled zucchini and eggplant, lettuce and tomatoes topped with both grated ricotta and a ball of buffalo mozzarella.  It was large enough to share and served with what our waiter referred to as focaccia (basically cut up pieces of plain pizza crust).  We probably could have stopped there and been satisfied as we were already starting to feel full but we couldn’t leave without our hard-earned pizza. 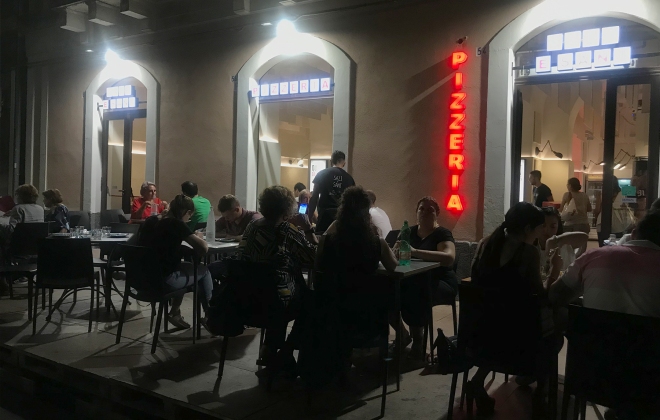 The menu at Sazi e Sani had about two dozen different pizzas to choose from, organized under the headings of red, white and classic and all rooted in fresh quality ingredients.  We decided on a Bufala with melted buffalo mozzarella and basil and a Pomodoro e Melanzane with roasted eggplant, sweet cherry tomatoes and salty grated ricotta.  When our pizzas arrived they were so large that they spilled over the sides of the plates and were everything we hoped for and then some – really good sauce, extra chewy crust and quite possibly some of the best pizza we’ve ever had.  Prices were very reasonable given the size of the portions and the only problem (if you can even call it that) was that we had too much food. 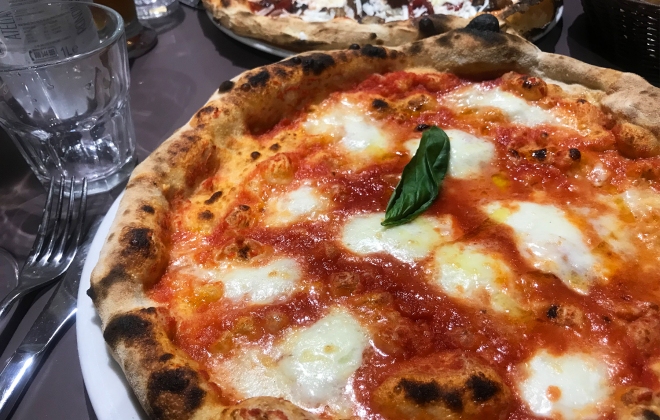 La Pentolaccia
As the saying goes “the best things happen when you least expect them”, which was definitely the case with our dining experience at La Pentolaccia.  We literally stumbled upon this hidden gem when we decided to pass on the restaurant we initially had planned for our last night in Catania and are glad we did.  While the main dining room of this traditional trattoria was empty it was the glowing courtyard down the alleyway from Via Coppola that caught our eye.  The courtyard was the type of charming and rustic setting that I imagined dining in Sicily to be like, surrounded by stone buildings under a canopy of stars.  We were met by two guys in black t-shirts in jeans who were seating tables, which filled up quickly with a good mix of tourists and locals. 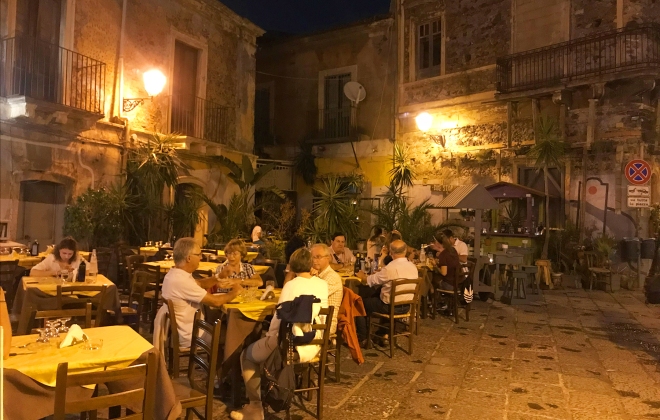 Another reason we choose La Pentolaccia was because of the menu board on the street, which boasted a variety of pasta, meat and fish dishes at a ridiculously affordable prices (around 5 euros per plate!).  We began with a few Aperol spritz and the small antipasti platter that was big enough for two people to share with a huge assortment of cold Sicilian specialties from the buffet inside like marinated vegetables, potatoes and eggplant several different ways.  The antipasti were full of flavor and surprisingly not too heavy with oil and vinegar.  Next we enjoyed what would be our last Pasta alla Norma (which was even better than the one we had the first night), grilled chicken pounded thin and seasoned with only salt and pepper and an insalata mista along with house wine.  The dessert menu was verbally explained to us by our young waiter, from which we chose the ricotta and almond cake that was like eating a cannolo without the shell.  Ending our meal with an espresso, we couldn’t have asked for a more prefect experience. 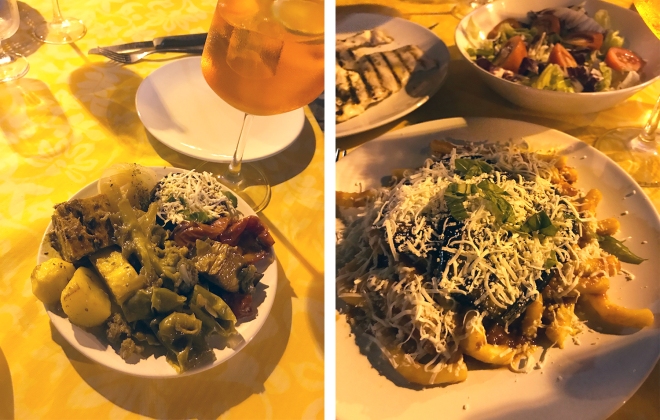 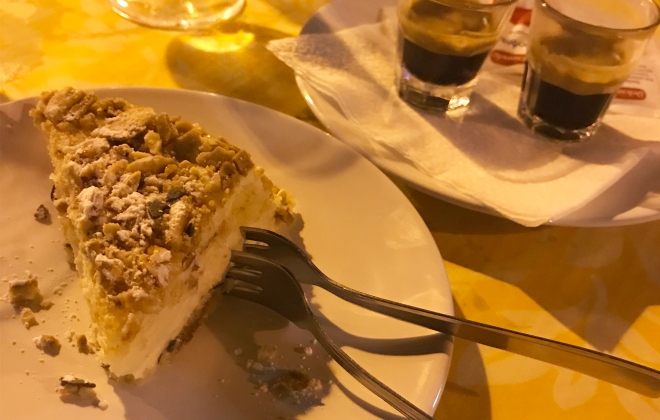 Gelato
It’s easy to indulge in your sweet tooth in Sicily with specialties ranging from cannoli and cassata cake to gelato and granita.  In Catania I was blown away by the quality and the intensity of the gelato in particular, which was consistently creamier and more flavorful.  While you’ll find many tempting options throughout the city, I highly recommend the pistachio and chocolate gelato at Soglò Cafè at Via Etna, 56.  Another noteworthy place was Caffè Prestipino at Via Etna, 30 on Piazza del Duomo where you’ll find a kaleidoscope of gelato, pastries, cookies and other sweets artfully displayed in its cases.  Go ahead, see if you can resist.  ;) 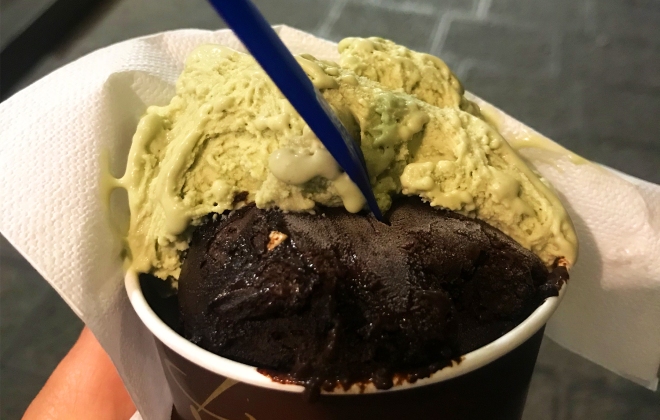 Today on the blog: Travel back in time at Petrified Forest National Park. Some of the logs found here are 225 million years old, predating even the dinosaurs! 🦖 Link in profile to read more about this under the radar national park. #travel #petrifiedforest #nationalpark #findyourpark
Nothing but blue skies in the Blue Forest. 💙 #petrifiedforest #nationalpark #findyourpark
Fun fact: The saguaro cactus can live for 150-200 years and it’s arms don’t typically appear until 50-100 years.🌵Thanks for the views Scottsdale!
“Flowers are the music of the ground; From earth’s lips spoken without sound”. 🌼🌎 #earthday
Where sand meets sky. ✨ #nationalparkweek #whitesands #findyourpark
Another of my favorite spots in Joshua Tree is quite different in terrain but no less incredible to explore. Aren’t National Parks amazing? 💛 #travel #joshuatree #findyourpark
Did you know the Joshua Tree is not actually a tree? Rather it’s part of the yucca family with its twisted Dr. Seuss-like branches and thick waxy leaves.
Morning views to beat the Monday blues. 🌤⛰🌴 Link in profile to read about some of my favorite hiking spots in Palm Springs!
#tbt Palm Springs is the perfect place to relax and recharge and for me that means finding a hiking spot like Palm Canyon, the largest naturally-occurring fan palm oasis in the word! 🌴