Visiting the Valley of the Temples in Sicily 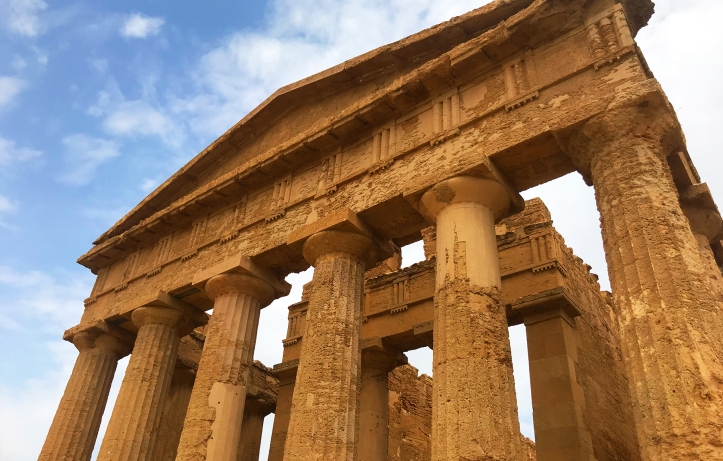 The Valley of the Temples is one of the most visited sites in Sicily and it’s easy to see why.  Like the Roman Forum or Acropolis in Athens, this vast archeological park is a great example of the glory of ancient civilizations whose empires spanned much of the Mediterranean region.  I always find these types of places particularly interesting since the ruins we see today are only subtle hints of the grandeur that once was.

Because of Sicily’s central location, pretty much every group you can think of staked claim the island at one point or another and the Greeks were no exception.  Dating back to 582 BC, the Valley of the Temples was the site of the ancient city of Akragas (once the fourth largest ancient city in the world!), which became one of the most significant Greek colonies in Sicily until it was conquered by the Romans and renamed Agrigentum in 210 BC.  Today it’s a UNESCO World Heritage site that spans more than 5-square miles and boasts some of the best-preserved Greek ruins outside of Greece. 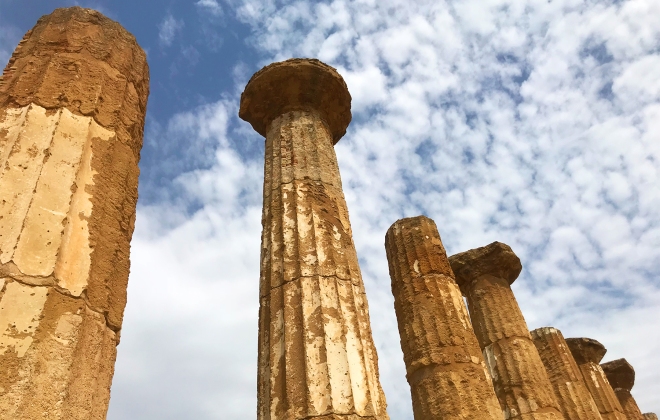 A visit to the Valley of the Temples fit nicely into our week-long itinerary in Sicily as we drove from the east to the west coast.  We spent several hours exploring the ruins, but the park is so large that you could easily fill an entire day if you arrive early and are interested in also seeing the nearby archeological museum and Kolymberta gardens.  Here’s what you need to know to help you plan your visit.

How to Get There
The Valley of the Temples is located in Agrigento just south of the modern city.  From there you can take bus line 1, 2, 2/ or 3 from the bus or train station to various entrances near the site.  The journey is about 15-20 minutes and tickets can be purchased in advance or on board. 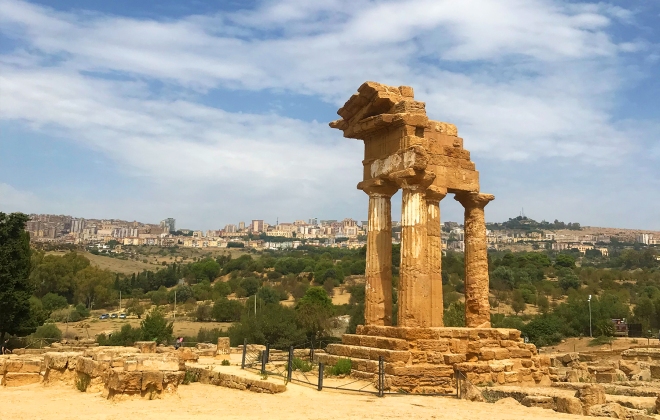 If you’re traveling by car from other parts of Sicily, the Valley of the Temples is around 2 hours away from major cities including Catania, Palermo and Trapani.  There’s a parking lot near the Porta V entrance where you grab a ticket on the way in and then pay at the automated vending machine and re-insert on your way out.  Also, I highly recommend purchasing your tickets online before you arrive to avoid standing in potentially long lines in the brutal sun (we arrived around mid-day in September and waited for at least 30 minutes – thank goodness for the snack stand selling refreshing lemon granita!).

What to Expect
The park is divided into Eastern and Western zones that encompass a collection of seven Doric-style temples and a necropolis set amongst vast blue skies and olive trees.  The star attraction is the Temple of Concordia, which in and of itself is one of the best-preserve temples in existence due to reinforcements that were put in place when it was converted to a Christian basilica in the 6th century.  Today it stands at the end of the main road towards the eastern end of the park, flanked by a fallen bronze statue of Icarus, the figure in Greek mythology who dared to fly too close to the sun.  Other temples are dedicated to Juno, Hercules, Castor and Pollux (Dioscuri), Vulcan, Asclepius and Olympian Zeus. 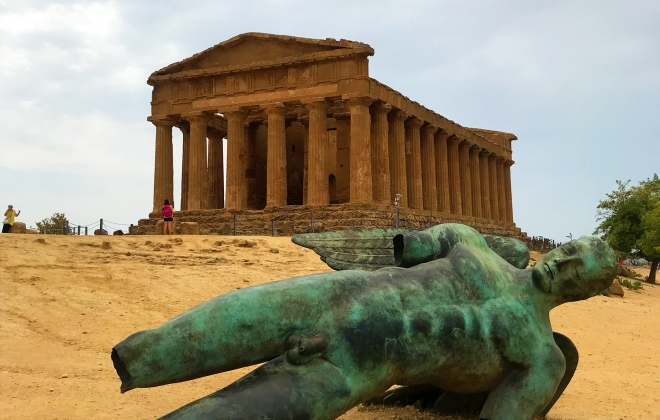 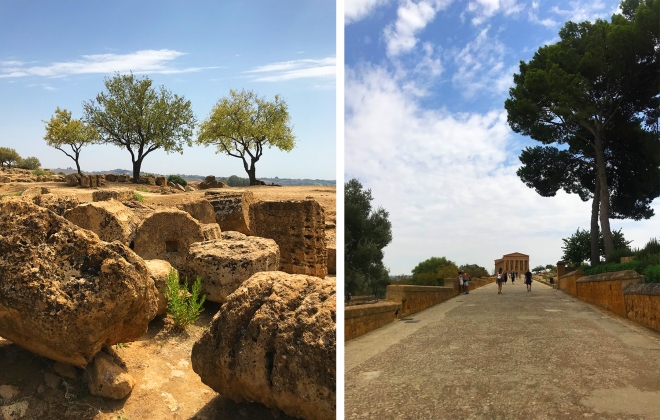 The Temple of Olympian Zeus is perhaps the most evocative area in the park, which to me felt as if we were walking through a graveyard of toppled stones and columns surrounding the temple.  It was built to celebrate Akragas’ victory over the Carthaginians and ranks among the largest Doric temples ever built.  You can get a sense of its size and scale by the male telamon statues that were intended to support the structure (the female equivalent were called caryatids, a prime example being the Erechtheion at the Acropolis).  There were 38 of these in total, each comprised of 12 stacked blocks measuring 8 meters (26 feet) tall that would have stood on the outside of the temple in between each of its columns.  Today these statues are like sleeping giants, still lying where they had fallen centuries ago. 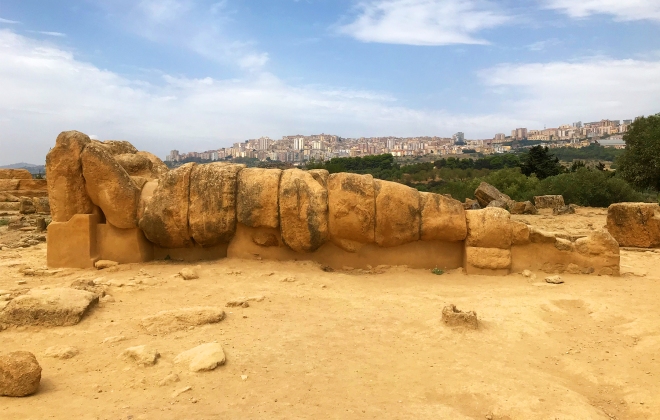 Also Nearby
After our visit we made our way back to our car and continued on to our next destination, Scala dei Turchi.  Made from soft and chalky limestone shaped by wind and water, this blindingly white cliff steps its way down towards the sparkling blue sea and is nothing short of otherworldly.  Its name translates to “Stair of the Turks” after the Arab pirates who used to take shelter here as they raided nearby towns.  Today the area is a prime spot for sun seekers. 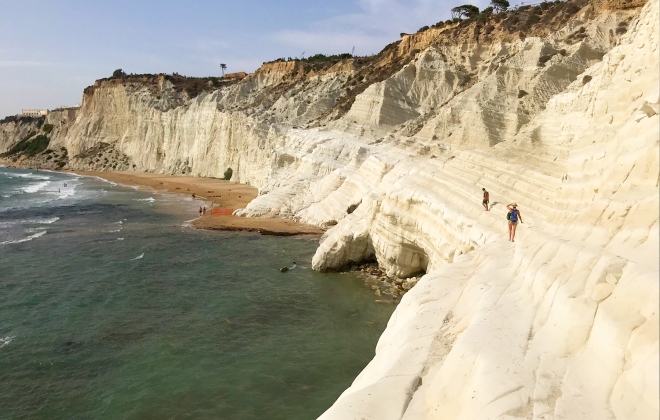 Scala dei Turchi is only 15 minutes west of the Valley of the Temples by car via SS115 and SP68 (keep an eye out for blue parking signs for various lots along the way).   After you arrive expect a set of steep wooden stairs down to the beach, then continue across a shallow bay (good water shoes recommended!) to the base of the cliffs.  You can escape some of the crowds by walking a little further out along the face of the cliff, which will eventually lead you to another beach area. 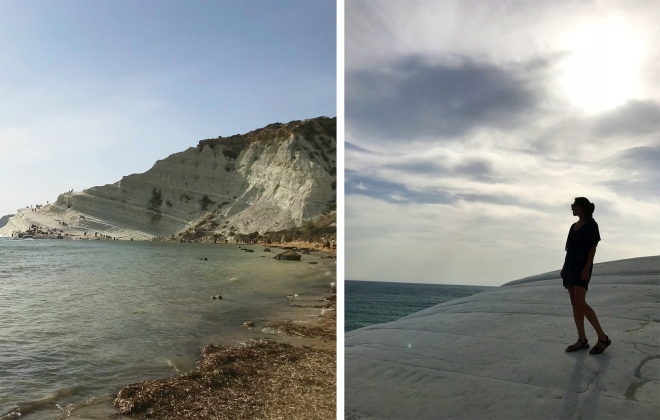 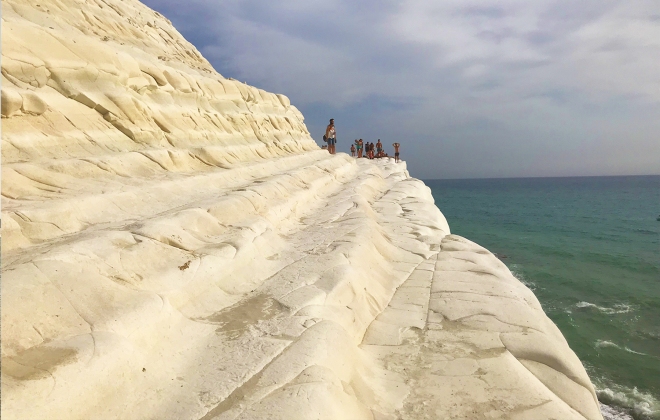 Paris never disappoints, especially at night. ✨
Paris never disappoints, especially at night. ✨
When the weather is hot, do as the Italians do. 🏖
Summer nights. 🌅
Seattle may be known as the Emerald City but the forests of the nearby Olympic National Park offer a kaleidoscope of green in the form of moss-covered trees, enchanting ferns and other plants that carpet the forest floor. 🌿 Link in profile for my 2-day itinerary in this mesmerizing destination.
Coffee culture is alive and well in #Seattle and a great place for a coffee + sweet treat is @toppotdoughnuts. ☕️🍩
Sunset at the Space Needle. ✨
Name that skyline! If you spotted the iconic Space Needle then you’ll know it’s none other than #Seattle.🗼Today on the blog I share my top 10 things to see and do in the city. Link in profile to read more! #travel
A beautiful place to hike, tide pool and learn a little history too. Cabrillo National Monument in #SanDiego is an unexpected delight that has all that and more! Link in profile. #travel