Taormina was first described to me as the jewel of Sicily and it’s not hard to see why.  Beautiful Baroque architecture and ancient ruins, adorable boutiques and cafés and stunning vistas overlooking postcard-perfect coastlines.  Where do I sign up?

Located on the eastern side of Sicily high above the Ionian Sea between Messina and Catania, Taormina has long been a tourist magnet with a resort-town feel like that of the Amalfi Coast or Lake Como.  The result and only possible drawback is that Taormina can be too popular at times with inflated prices and flocks of holiday-goers crowding its narrow streets and scenic viewpoints.  So during our stay in Catania we decided that the best option for us would be to dedicate one day to discover all of the richness that Taormina has to offer.  Needless to say we weren’t disappointed.  Here’s what you need to know if you too are dreaming of a daytrip to this incredible destination. 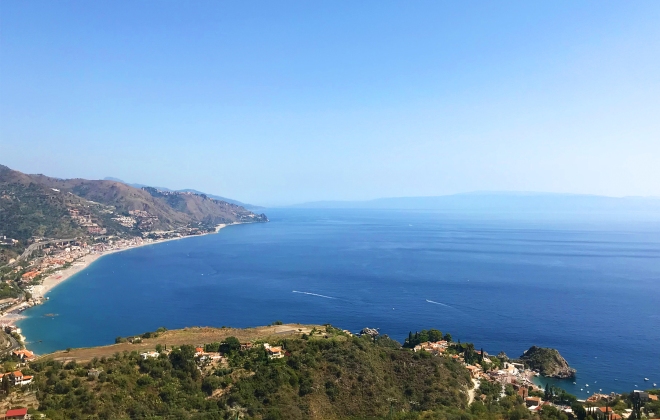 How to Get There
Taormina is about an hour away from Catania by car or bus.  Since we had rented a car for our trip, driving would offer us more flexibility over public transportation.  It’s a relatively straightforward route via A18 and SS114, but since Taormina’s historic core is closed to traffic you have to sort of loop around the city to reach one of its three parking facilities.  We parked at the Porta Catania garage, which is just steps from the city center and charges by the hour.  Be sure to take your ticket with you because you pay via an automated vending machine at the street level entrance (level 7) before returning to our car.  If you’re driving it’s also worthwhile to note that there is one toll along the way.  Instead of paying as you pass through, you take a ticket when you get on the Autostrada and give it to the attendant at the booth when you get off to determine how much you owe.

10am – Corso Umberto I
The main road in Taormina is the pedestrianized Corso Umberto I, which spans the once fortified city between Porta Catania and Porta Messina.  Like much of Sicily, the Taormina we see today is a product of many layers of history with influences ranging from the Greeks and Romans to the Arabs and Normans, which is reflected in the different architecture styles of the buildings and sites along this main street.

Our first stop was Piazza del Duomo with its 13th century medieval Cathedral of San Nicolo that boasts a beautiful marbled-lined interior despite its rather simple exterior.  The square is also home to the town’s city hall and the Quattro Fontane, an ornate fountain named after its 4 distinct spouts.  Our next stop was Piazza IX Aprile, which is perhaps one of the most iconic spots in Taormina.  Here you’ll find a handful of stylish cafes, a clock tower and the richly Baroque Church of San Giuseppe anchoring the checkerboard square.  It’s a great place to sip a cappuccino at a café or sit on one of its benches to take in the gorgeous panoramic view of the Bay of Naxos below.

11am – Ancient Theatre
We skipped passed the rest of Corso Umberto since our plan was to return to shop later in the day and continued on towards the Ancient Theatre.  Impressive to say the least, the amphitheater dates back to the 3rd century B.C. and reflects both Greek and Roman influence.  It takes full of advantage of its dramatic location, almost as if it’s suspended between the sky above and sea below, with a smoldering Mount Etna in the background and views as far as mainland Italy on a clear day.

At nearly 358 feet wide, the ancient theatre is the second largest in Sicily after Siracusa and is still used today for concerts, performances and a film festival in the summer.  Inside there’s also an interactive area with computer animations that show what the theatre might have looked like during its glory days.  When we visited in September the line moved relatively fast, although if you’re visiting during peak season you may want to consider buying your tickets online in advance and arriving early to beat the heat of the mid-day sun. 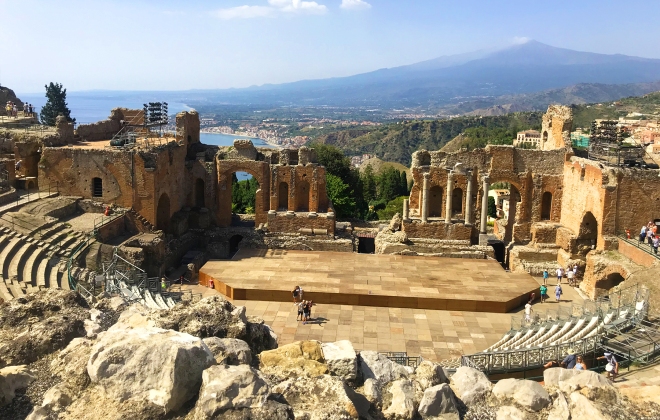 1pm – Villa Comunale
Speaking of the sun, we were definitely in need of some respite from the heat and found relief in Taormina’s beautiful public gardens, Villa Comunale.  The gardens were created in the late 19th century by English noblewoman Florence Trevelyan, who first came to Sicily in part because of her complicated relationship with Queen Victoria and eventually ended up marrying the mayor of Taormina. 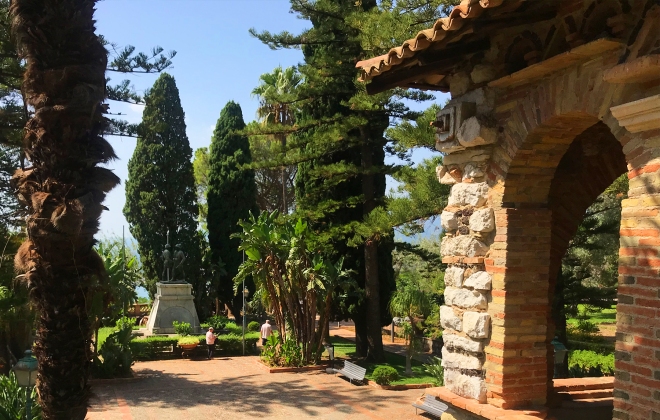 Villa Comunale is designed like a traditional English garden and overflows with Mediterranean plants, trees and flowers.  Punctuated by terraces, towers and (more) views for days, the gardens are a multi-level paradise and welcomed retreat from the otherwise crowded streets of Taormina.  It was also the perfect place to cool off with our first granita, a heavenly almond and chocolate chip frozen delight. 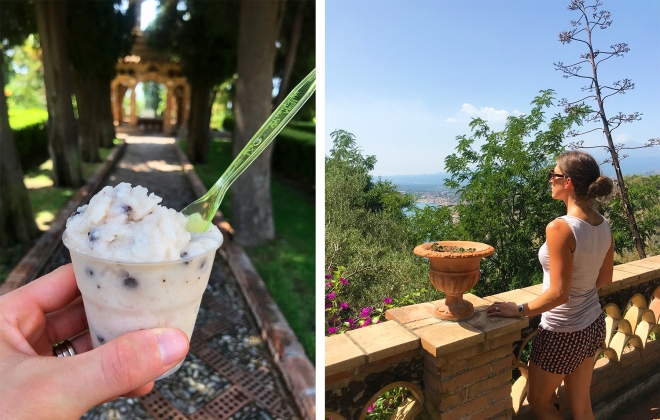 2pm – Isola Bella
Refreshed and recharged our next destination was the famed Isola Bella, a small rocky islet that was once the home of Florence Trevelyan and is now a nature reserve.  Depending on sea conditions there’s often a narrow pebbly path that connects that the island with the mainland for visitors to walk across (or in some cases wade through shallow water).  We first spotted Isola Bella from the Piazza Belvedere viewpoint off Via Pirandello near the far edge of town, which offers the best perspective of the island and crystalline bay below.

From here we decided to take the stairs to the left of the viewpoint and make the grueling 15-minute descend down steep stairs to reach Isola Bella.  It was more exhausting than we anticipated, but the stunning views made up for it.  As an alternative, you can take the funvia (cable car) from the Taormina station on Via Pirandello between the bus terminal and Porta Messina to Mazzarò and walk about 10 minutes more to the beach.  The cable car trip is only about 5 minutes and runs every 15 minutes – definitely a lot less strenuous than the stairs, but we enjoyed the fact that we passed virtually no one else along the way and felt like we earned both the beach and the that night’s pasta.

Both options converge at a final set of stairs that lead down to the rocky beach packed with sunbathers who have seemingly set up camp for the day.  You’ll also find a few restaurants and souvenir shops selling beach essentials you may have forgotten (i.e. towels, sunscreen, water shoes).  We made our way through the more crowded sections of the beach and found a quiet spot on the far right of the bay. We spent some time cooling off in the water* then walked across to explore the island before making the daunting trek back up to town.

*One piece of advice, do NOT sit on the algae-covered rocks in the water.  Not only are they slippery and sharp in some places, but the bacteria can result in a nasty rash on your skin that requires a trip to the farmacia for prescription strength cortisone cream.  I’m telling you this from personal experience so you don’t meet the same misfortune that I did!

4pm – Shopping
At this point we were ready for another granita, this time arancia rossa (blood orange) and gelsi (mulberry) flavors, followed by a coffee break at Bar E Snackbar Capriccio on Corso Umberto, 85.  We ordered a much-needed espresso and the first cannolo of our trip, which was filled-to-order with an amazingly light cream with just the right amount sweetness and dipped in chocolate chips and pistachio pieces.  Amazing to say the least.

From here we wandered in and an out of the shops along Corso Umberto and the surrounding streets, which sell everything from cheap souvenirs to high-end jewelry, art, ceramics, food, sweets and more.   Among the items we couldn’t resist were the bold red-orange coral jewelry at Vadalá Salvatore at Via Teatro Greco, 27 and the beautiful ceramic serving ware at Ceramiche Rapisarda at Corso Umberto, 211-213 that would be perfect for entertaining at home.  It stated raining just as we were about to wrap up our shopping and head back to our car, marking the end of a great day in Taormina.

If we had more time (and energy) we would have liked to have made the trek up to Castelmola, a former hilltop village above Taormina with even more sweeping views, castle ruins and the novelty Bar Turisi known for its almond wine along the way.  It’s reachable by bus or by foot up a windy road about an hour each way.