Scotland Part 2: What to See and Do on the Isle of Skye

The largest of the Inner Hebrides, Skye’s name comes from the Old Norse word meaning the “Misty Isle” because of its often unpredictable weather.  It was a part of Scotland we were probably most excited to see – rain or shine – with its dramatically beautiful and rugged landscape, which we planned to take full advantage of during our 2 days on the Isle of Skye.  The irony though was that the weather was near perfect while we were there without any interruption from the elements.

We said goodbye to Inverness and headed west on A82 passing a handful of interest spots along the way like the one and only Loch Ness, home to the fabled monster of the same name and the ruins of Urquhart Castle.  Both Nessie as the monster is affectionately known as (we may or may not have had a sighting of the elusive creature) and the castle were worth a brief stop and photo opp from the side of the road.  As we got closer to Skye the scenic drive transformed into more of what I imagined Scotland to be like – lush green hills as far as the eye could see with the more than occasional roadside flock of sheep and a few photogenic hairy “coos” for good measure.  Right before crossing the Skye Bridge we also stopped at the Eilean Donan Castle, a picture-perfect stony castle and former Mackenzie stronghold that sits on an islet where 3 lochs meet and is sure to be featured on the Scotland calendar you have hanging on your wall. 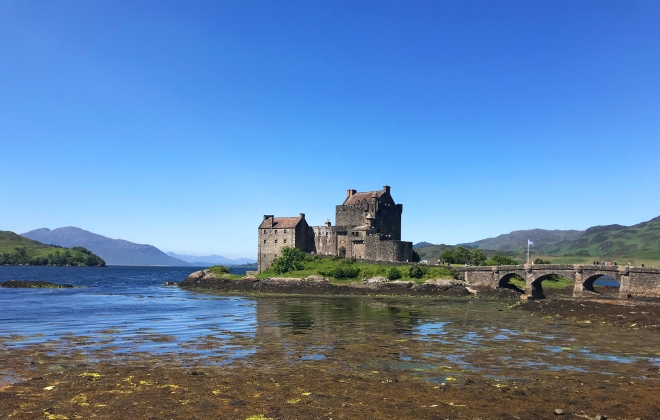 What to See and Do
Our first stop on Skye was the Talisker Distillery on the island’s southwest coast.  It’s Skye’s oldest working distillery dating back to 1830 and its whiskies have a distinctive smoky flavor from the peat that’s used in the malting process.  We pre-booked the classic distillery tour that walked us through the full whisky-making journey, from malting to milling, fermentation, distillation and maturation, which by Scottish law must be at least 3 years (and one day to account for leap years).  The longer whisky is aged the more flavor it has, and Talisker typically produces 10, 18 and 25-year bottles, along with other specialty ones.  Our tour ended with a tasting of Talisker Storm and a visit to the gift shop where we purchased a bottle of Talisker 10 to take home.

After leaving the distillery we drove about 15 minutes to reach a spot known as the Fairy Pools (look for the signs for Glenbrittle).  As the name implies it’s a somewhat magical place created by a constant string of crystal clear pools and waterfalls cascading down the side of the rocky base of the Cuillin Hills.  There’s a car park across the street for a small fee and the trail is a steady upward trek alongside the stream.  Most people hike about 20-30 minutes to reach the main pools before turning back and there’s longer loops for those who are more ambitious (more details here).  We walked about 40 minutes or so and found a quiet spot to stop and put our feet in (bring your bathing suit if you’re brave enough to get in the pools!).  The cool water was perfect considering it was an unusually warm day without a cloud in the sky.

Later that night after dinner we walked around Skye’s capital Portree, which is easily connected to the mainland and a good home base for exploring Skye.  The town was much smaller than I expected so after strolling along its pastel-colored harbor (watch out for the seagulls) we walked up the hill to the area known as “The Lump” where the Skye Highland Games take place annually and climbed the nearby Apothecary Tower for a panoramic view of the surrounding bay. 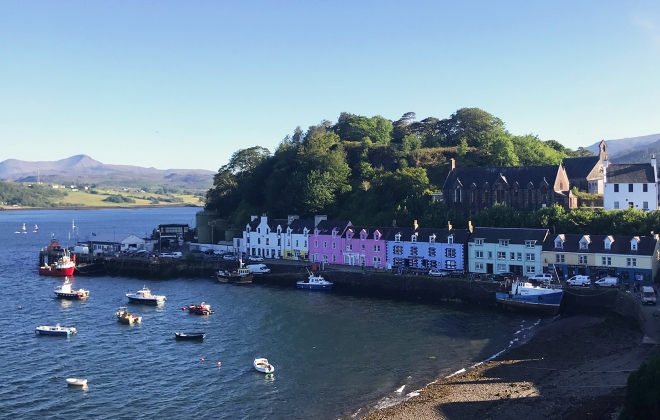 The next day we hit the road early to explore the Trotternish Peninsula.  The counterclockwise loop takes about 2 hours to complete without any stops but what makes this drive so great is all of the points of interest along the way, where you can spend as little or as much time as you want.  If I could offer one piece of advice it would be to start your day as early as possible because the tiny car parks and trails for some of the more popular spots will get crowded fast.  For us it was a full 9 to 5 day beginning with the Old Man of Storr about 15 minutes away from Portree right off A855.  This was our first of 3 hikes of the day to the 160-foot tall pinnacle that anchors this landslide ridden area.  It’s a 2.75 mile loop that took us about 1.5-2 hours to complete with a few brief stops along the way.  As we made our way up the stone footpath we saw a handful of people taking the right fork in the path, however we continued to the left per the detailed directions outlined here, only to find the path behind the Old Man of Storr (the Sanctuary area described in Stage 4 in the link) covered by boulders.  Rather than retracing our steps we made our way down via an “alterative” route, which was a steep climb straight down the side of the rock formations.  When surveying it from the bottom it probably wasn’t the smartest option but we made it nonetheless and continued towards another famous rock known as the Cathedral or Needle Rock (look for the little “window” near the top) before heading back to our car. 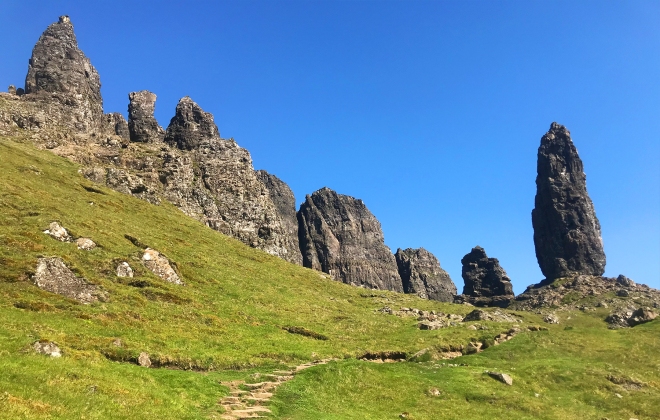 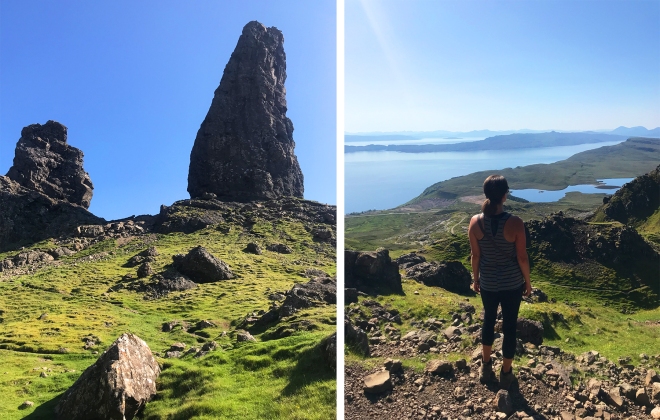 We got back on the road and made two short stops at Lealt Gorge where a scenic waterfall and river tumble towards the sea and Kilt Rock, an appropriately named cliff with vertical lava columns that resemble the pleats on a kilt.  From here we continued north on the A855 towards Staffin with a brief coffee and toilet break at the Skye Blue Gallery (look for the blue signs) before turning left off the main road to reach the Quiraing.  The parking area was extremely busy as it was already fairly late in the day at this point but we eventually found a place to park and change into shorts before hitting the trail.  The well-defined path weaves its way through the dramatic terrain, with the occasional wildflowers growing in the crevices of the rocky earth and the more than occasional echo of sheep baa-ing in the distance as they grazed.  I was swept away by the panoramic views of the surrounding valley as we climbed higher, an expansive sea of green rising and falling that no photo could ever quite do justice to capture.  The full 4-mile trail would take about 3-4 hours to complete (which you can read about in more depth here), but because of the hot mid-day sunshine and cloudless sky we hiked about 45 minutes to reach another landmark called the Needle before heading back to our car. 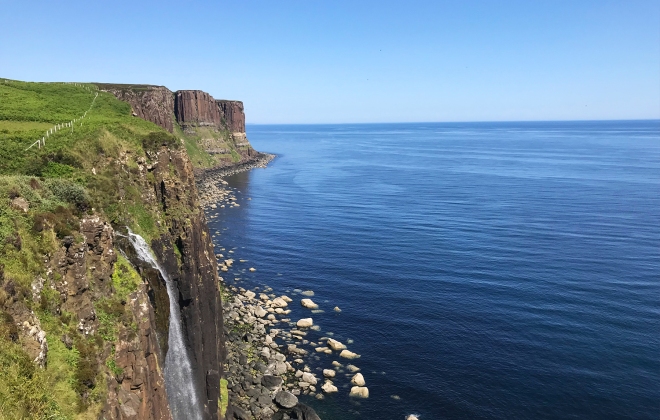 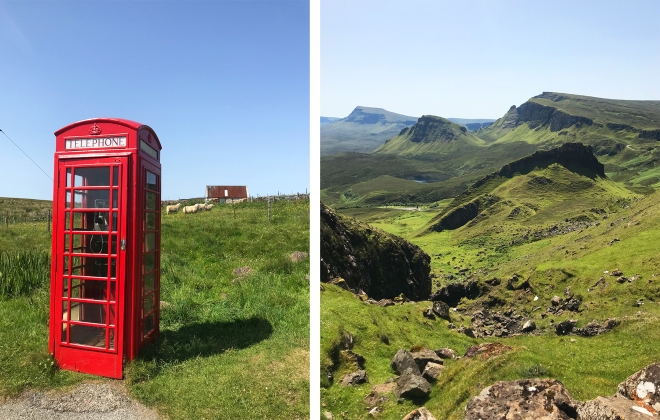 Back on the main road we drove towards the northern most tip of the peninsula, bypassing the Skye Museum of Island Life but stopping at the ruins of the Duntulm Castle, which was fenced off to human visitors but a handful of crafty sheep seemed to have found their way inside.  Our last stop of the day would be the Fairy Glen just past the town of Uig off A87.  There was no clear parking area but we found a handful of cars on the left side of the road (which Google labels as the car park) and more on the right side a little further up, which is where the Fairy Glen actually is (detailed directions here).  As we emerged over the hill an otherworldly place came into view with its lush green conical hills and mysterious spiral shapes traced into the ground.  We walked around for about an hour or so and climbed the rock formation known as “Castle Ewen” to survey the mysterious landscape that would have felt even more evocative had the weather been gray and misty.  To our disappointment we didn’t see any fairies, perhaps it was too warm for them that day.  Exhausted and surprisingly sunburned ourselves, we returned to our B&B in Portree for a much-needed refresh before dinner. 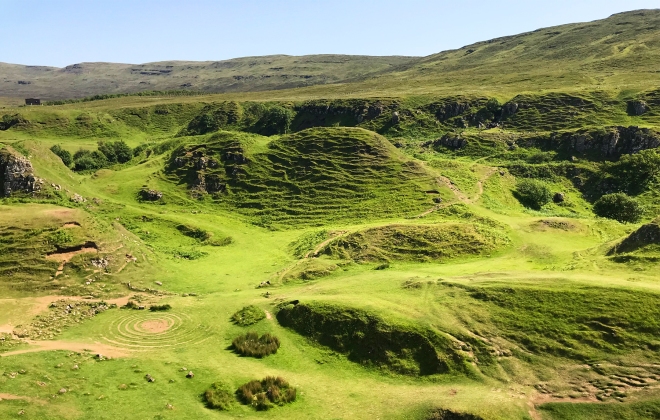 Where to Eat
We found that most restaurants in Portree did not take reservations and even though we had a few spots picked out in advance we ended up deviating from our plan once we were there.  We were pretty hungry our first evening in Skye after a long day of driving and hiking so were on the hunt for a place with a decent menu and a table available immediately, which turned out to be the Tongadale Hotel (Wentworth Street).  We sat in a casual and homely back room that serves as the hotel’s breakfast room and ordered traditional pub fare of fish and chips and a steak and ale pie.  The food was hearty and filling and paired nicely with a Skye Red beer and red wine.

The second night we faced a similar situation after hiking around the Trotternish peninsula and ate at the Caroy House (Somerled Square – permanently closed as of 2021) right on the main square.  A large table was set up for a wedding party so there was a short wait, so we headed to the bar and ordered a glass of Misty Isle Gin from the Isle of Skye Distilleries to pass the time.  The restaurant’s contemporary décor largely influenced our decision to eat there and we went with standard offerings on the menu like the beef burger and fish and chips along with a Skye Gold beer.  It was such a warm day that we stopped for ice cream after dinner at the Caledonian Cafe (Wentworth Street) before capping our night with a drink at the Merchant Bar (13 Bosville Terrace) attached to the Bosville Hotel.  It was here that I had my first introduction to Edinburgh Gin (and thereafter went across the street to the Co-op grocery store to buy a bottle to bring home) while my husband had one more glass of local whisky (Talisker Port Ruighe) for the road.

Where to Stay
I had a hard time finding a B&B in Portree with availability for our end of June dates, which made me expand my search radius a bit further.  It couldn’t have worked out better because the Orchard House was one of the loveliest places we stayed during our time in Scotland.  This family-run B&B is tucked away on the outskirts of town, about a 10-15 minute walk from the tourist center.  We were warmly greeted by Emma upon arrival who showed us to our spacious, light-filled and immaculately clean room with an equally as large bathroom with separate tub and walk-in shower.  Breakfast in the mornings included both continental items and a full Scottish feast cooked-to-order by her husband Lance.  The Orchard House is truly a hidden gem, which far exceeded our expectations.

The Isle of Skye was the second part of our whirlwind trip around to Scotland.  Check out the map below for our full 7-day itinerary and read more about Inverness, Glencoe and Edinburgh!

Leave a Reply to Scotland Part 3: What to See and Do in Glencoe – Boarding Pass Cancel reply