Celebrating 70 Years of Dior at the Musée des Arts Décoratifs

“My dresses make a princess of every woman.” – Christian Dior

I love when a visit to a big city coincides with an interesting museum exhibit, which was exactly the case with “Christian Dior, Couturier du Rêve” at the Musée des Arts Décoratifs in Paris.  This special exhibit celebrates the 70th anniversary of the founding of the House of Dior and one of the most notable fashion designers of the 20th century.  Visitors are treated to a gorgeous multimedia retrospective of more than 300 gowns along with countless accessories, sketches, video and other artifacts to bring its history from 1947 to the present to life.  If you love art, design or fashion and will be in Paris over the coming months, there’s still time to see this truly amazing exhibit for yourself before it wraps up in January 2018.  You won’t be disappointed.

First and foremost, get your tickets in advance.  I cannot stress this point enough.  The line to get into the exhibit can be very long, and even if you do buy tickets beforehand you should still be prepared for a wait as there is limited space inside the exhibit area.  We purchased ours online a few days prior, arrived shortly after the museum opened and still waited about an hour to get inside.  It looks like museum has since instituted a time slot ticket policy (vs. day-specific only), which should help alleviate some of the wait time, but definitely be prepared just in case.  Additionally, I found that there was so much to take in that we easily spent a couple of hours at the exhibit and didn’t have time to explore the museum’s permanent collection so plan your time accordingly.

Once inside, there are 2 sections that span a total of more than 32,000 square feet.  Beginning with Dior’s early years as an art gallery owner in Paris in the 1920s who dreamed of being an architect, it was this appreciation for art and design along with other sources of inspiration – his artists friends, the architecture of Paris, his word travels and even the flowers in the garden of his childhood home in Normandy – that would play out in his work for years to come. 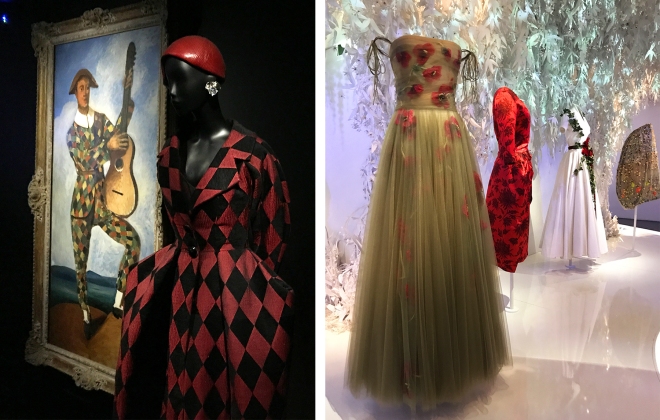 With a wealth of artistic and visual culture to draw from, he launched the House of Dior in 1947.  His first collection redefined the feminine shape in the post-war years and helped put Paris on the map as the fashion capital of the world.  Dior’s “New Look” was characterized by nipped waists, ample busts, soft shoulders and sculpted hips, the most famous example being the Bar suit (named after the nearby bar at the Plaza Athénée hotel, a favorite haunt for fashionable women at the time), which remains an identifiable and iconic look today.

The exhibit also celebrates color as a unifying theme across pieces, styles and eras and the importance of the atelier and craftspeople, and showcases the work of Dior’s 6 successors including the first female and current creative director Maria Grazia Chiuri. 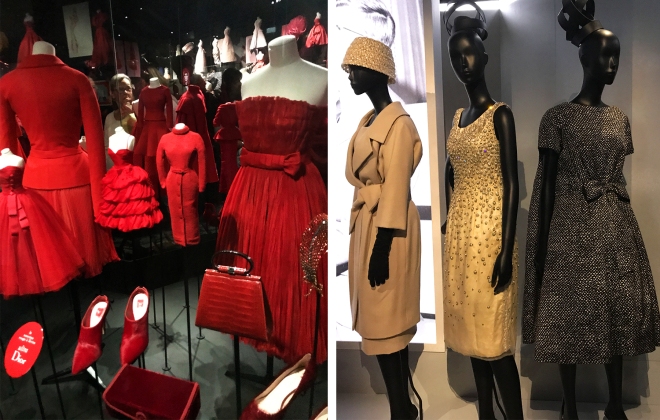 The grand finale is a sparkling room designed to evoke the glitz and glamour of the lavish post-war balls, which provided an opportunity to create sumptuous gowns once again.  The exhibit also pays homage to the celebrities who have famously worn Dior throughout the years, ranging from Grace Kelly, Marilyn Monroe and Elizabeth Taylor to Princess Diana, Marion Cotillard and Jennifer Lawrence, who accepted her first Oscar for Silver Linings Playbook in a timeless pink Dior gown. 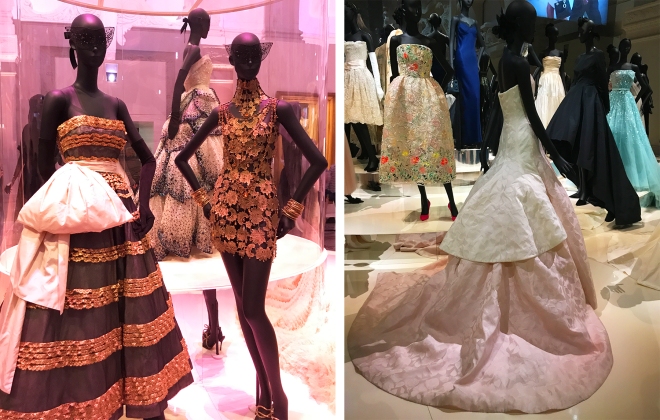 If you go: “Christian Dior, Couturier du Rêve” at the Musée des Arts Décoratifs runs through January 7, 2018.  Tickets include access to the museum’s permanent collection.  For more information, visit lesartsdecoratifs.fr/en.