The Patios of Córdoba 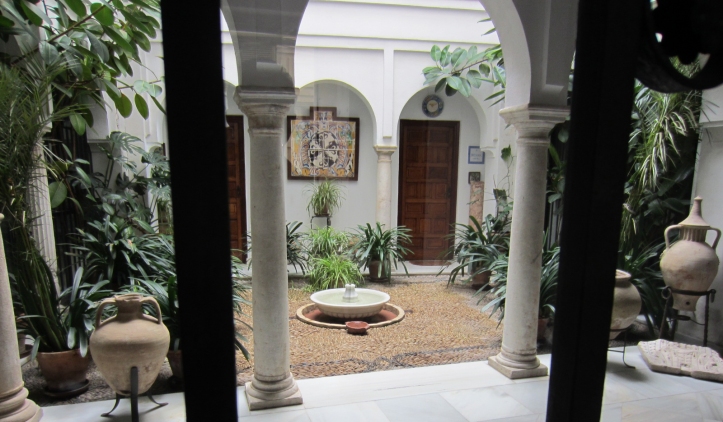 I was drawn to Córdoba by its architecture, but was charmed by its streets.  During a 2 week trip to Spain, the Andalucían city was near the top of my list of places to visit, mainly because of its great Mosque-Cathedral – a site I’ve wanted to see in person for years.  The Mezquita (as it’s known in Spanish) certainly lived up to my high expectations, with its red and white striped arches even bolder and more impressive that I imagined.  What I didn’t expect was just how much I would enjoy the neighborhood around the Mezquita.

Distinguished by its narrow winding streets, whitewashed buildings and decorative patios, the Jewish Quarter is the heart of Córdoba.  You could spend an entire day here wandering through the maze of streets, visiting shops and restaurants and exploring every nook, cranny and dead end.  While beautiful in form, the neighborhood’s architecture also serves an important function, acting as sort of a natural air conditioner in the hot, dry climate.  Residents would open their doors and windows and fill their central courtyards with fountains and vegetation – trees, flowers and other shrubbery – to help keep their homes cool.

In the springtime, the white walls also provide a blank canvas for Córdoba’s colorful Fiesta de los Patios.  Each May music, dance, food and the smell of flowers fill the streets as residents put their patios on display, opening their doors for the public to see the fruits of their labor.  Like a modern-day parade of homes, the festival dates back to 1921 when the first patio decorating contest was held for a grand prize of 100 pesetas (1 euro = 166 pesetas, so about 60 euro cents).  Today the first place prize has increased to a respectable 3,000 euros with more than 50 patios participating in this annual event.

Rooted in tradition and a sense of community, the festival is such an “integral part of this city’s cultural heritage” that it was named a UNESCO World Intangible Cultural Heritage Site in 2012 (the historic core of Córdoba is also a designated a UNESCO World Heritage Site).  It has become so popular that many residents have also begun decorating their patios at Christmas time for visitors to see.

Even though we weren’t there in the spring or during the holidays it was still a treat to walk up one of Córdoba’s most famous streets Calleja de las Flores, lined with bright blue hanging buckets filled with red geraniums.  It was here our search for patios began, peeking through iron gates from the streets in search of hidden treasures.

It became something of a scavenger hunt to find the next one, and although light on flowers the patios we still captivating with beautiful fountains, plants, tile work and other ornamentation.  One shop owner enthusiastically invited us into his store and led us to see his patio (complete with a water well) with the same warmth and pride that I imagine permeates the city during festival time.

Looking back, Córdoba is like a Russian matryoshka doll with the Mezquita at its core and layer upon layer of Roman, Moorish and Spanish history as well as Islamic and Christian influence, each as fascinating as its center.  Regardless of the time of year you visit, you will not be disappointed.