The Sweeter Side of New York

New York is a foodie’s paradise.  A spin around the city can be a gastronomic overload, from world class-restaurants to mom and pop shops, ethnic dives, specialty food stores and cozy cafes.  While I make sure to get my fill of bagels and pizza, it’s also no secret that I have a huge sweet tooth and New York is the perfect place to indulge.  Here are a few treats that are too good to pass up.

Cannoli
Whenever we visited my grandparents, they always had fresh cannoli on hand for dessert or an afternoon snack with espresso.  Packaged in a white box tied with red and white twine, I came to associate this Sicilian pastry with visits to New York at an early age.

It’s hard to find good cannoli where I live, so when I’m in the city I always seek them out.  For novelty, I go to Caffé Palermo on Mulberry Street in Little Italy.  Self-proclaimed Cannoli King “Baby John” DeLutro has been running the café since 1973, specializing in Italian cakes, pastries, cookies and of course, creamy ricotta-filled cannoli.  And a quick Google search for the “best cannoli in NYC” proves that he is living up to his name.

Gelato
When in Rome or New York, there’s nothing like a cup of cold gelato on a hot summer day.  While there are many tasty gelato places in the city, such as M’o Gelato and Florence-import Vivoli Il Gelato, I recently got a delicious coppa at Italian food mecca Eataly.  Located across from the Flat Iron building on 5th Avenue, Eataly is more than just a gourmet Italian food store.  Rather, it infuses a modern-day grocery store, cafeteria and cooking school with the vibrancy of a bustling European market.

Eataly’s NYC partners (including beloved Italian chef Lidia Bastianich) know a thing or two about good food, which is apparent through the bountiful selection of fresh and Italian-sourced products – pesto, pasta and prosciutto, oh my!  The housemade gelato was no exception, and my only disappointment about the pistacchio and nocciola double scoop (with nuts sourced from Sicily and Piedmont, respectively) was that it was gone too soon. 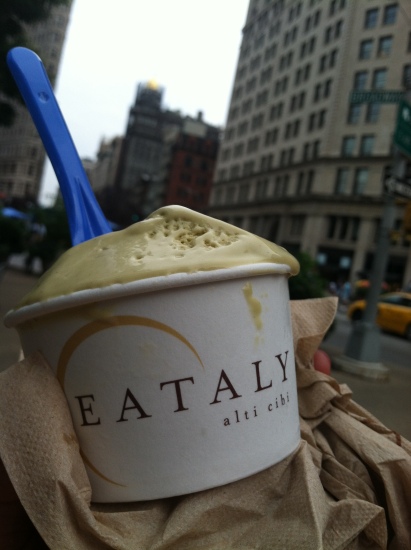 Macarons
From Italy to France, one of my favorite treats to indulge in is macarons.  Not to be confused with their double-o coconut cousin macaroons, these delicate meringue cookies are distinguished by an artist’s palate of pastel-colored shells that sandwich a buttercream, ganache or jam filling.  They are almost too pretty to eat, but let’s not be foolish.  ;)

And when it comes to the real thing, Ladurée is the crème de la crème, having first opened its doors in Paris more than 150 years ago on Rue Royale.  Luckily, New Yorkers only have to travel as far as the Upper East Side for authentic French macarons ever since Ladurée’s first-ever U.S. location opened in 2011.  A second location with a tea room in SoHo opened earlier this year, making it even easier to get your macaron fix in the city. 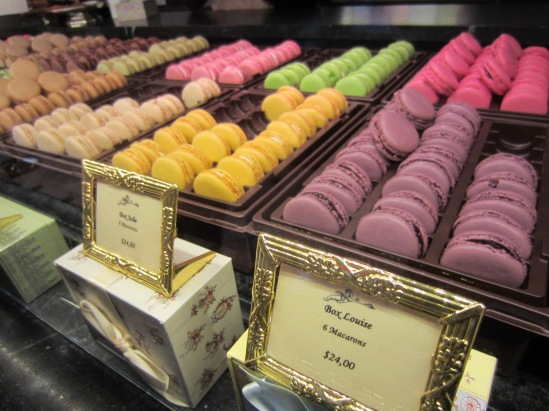 Cupcakes
In 1996 there was Magnolia Bakery, a humble spot in the West Village serving up old-fashioned American baked goods.  Enter Sex in the City, a scene in which Carrie and Miranda devour a Magnolia cupcake, and so the craze begins.

It’s amazing how a simple cupcake could reach mainstream status seemingly overnight – inspiring countless boutique shops and even entire TV shows dedicated to cupcakes – and today, Magnolia continues to be a draw for locals and tourists alike.  Topped with a fluffy mound of buttercream icing, the cupcakes are indeed delicious, but don’t overlook other treats like ice box cakes, fresh-fruit pies and other classic American sweets.  (Check out the beautiful cake from Magnolia that my colleagues surprised me with for my birthday.)

Rice Crispy Treats
After cupcakes there were cake pops and now cronuts.  Could the next craze in specialty desserts be gourmet rice crispy treats?

Taking the bake sale concept to the next level, the Treat House specializes in gourmet marshmallow and crisped rice squares in 25+ flavors like chocolate raspberry and caramel sea salt.  This new kid on the block, or should I say tree house (yes, they even have a tree house-inspired eating area), is great for special events, party favors, an unexpected gift or quick afternoon pick-me up.  A portion of your purchase is also donated to the Food Bank of New York City.  What could be sweeter?

What is your favorite sweet treat in New York?  Share it below!

Morning views to beat the Monday blues. 🌤⛰🌴 Link in profile to read about some of my favorite hiking spots in Palm Springs!
#tbt Palm Springs is the perfect place to relax and recharge and for me that means finding a hiking spot like Palm Canyon, the largest naturally-occurring fan palm oasis in the word! 🌴
#tbt Who else misses dining out?! 🙋‍♀️ Today on the blog I reminisce about some of my favorite places to eat and drink in #PalmSprings, including this iconic old Hollywood hot spot. 🍸🎞🌴
How was your weekend? 💙 #whitesands #findyourpark #travel #daytrip #happyplace
#tbt Palm Springs will always hold a special place in my heart as the last place I visited before the world went into lockdown. 💙 It’s the perfect blend of old meets new, with gorgeous midcentury modern architecture, incredible hiking and plenty of opportunities to soak up the sun. 😎
Reminiscing about the macaron course I took with @lacuisineparis a few years ago in #Paris. It might be time to pull out the recipes and make these beauties again. ❤️ #valentinesday #love #macarons #baking
When the world feels chaotic there’s no better thing to do than to escape to one of Mother Nature’s otherworldly places. 🪐
2020 will forever be the year the world stood still. At the start of the year I had lots of plans. A head full of wanderlust quickly turned to emotions of frustration and sadness about what was happening all around us. If there's one silver lining to the pandemic it's that it fostered a renewed appreciation for things we often take for granted like morning walks, dinners at home with family and exploring the beauty in our own backyard. Here's to a happy and healthy 2021! #travel #2020 #yearinreview
Exploring otherworldly places. ✨