Travel Back in Time at Petrified Forest National Park 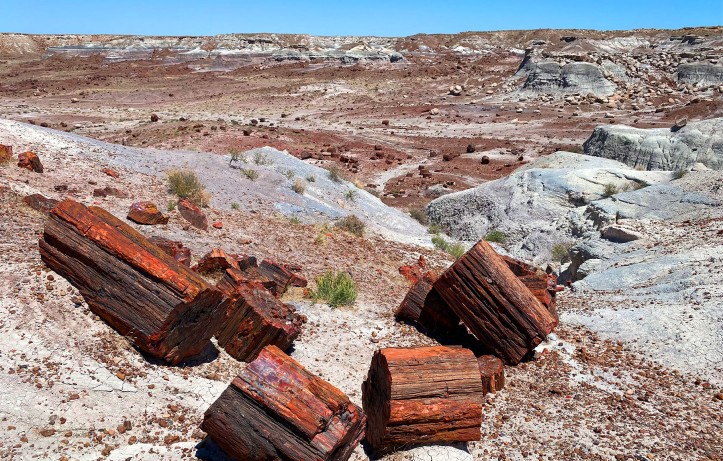 Many national parks preserve the past, from historical sites to geological wonders, and Petrified Forest National Park is no exception.  As you look around it may be hard to believe that the barren desert landscape of today was once a lush forest dating back 225 million years to the Triassic Period.  Over time trees toppled, rivers dried up and plants and animals were buried by layers of sediment.  Wind and water have since eroded these layers to reveal a prehistoric land frozen in time.

Located in northeastern Arizona about 3 1/2 hours from Phoenix, Petrified Forest is home to one of the largest deposits of petrified wood in the world, yet is one of the lesser visited National Parks making it light on crowds.  The park has been expanded over the years with the colorful hills of the Painted Desert in the north and the original Rainbow Forest in the south where you’ll find the highest concentration of the park’s namesake petrified wood.

I always pictured petrified wood to be bland, brown­-ish rocks still resembling their original form with the texture and grains associated with wood.  However what we saw here was much more vibrant and colorful.  Translucent rocks in vibrant shades of yellow, red, purple and pink littered the ground, some even with slivers of sparkling crystals.  This is a result of a chemical reaction millions of years in the making (predating the dinosaurs!) where wood is replaced by quartz, and the different colors that we see today are from the oxidation of various minerals.  Crystalized quartz is very brittle too, which causes many of the larger logs you see around the park to break crosswise like a piece of chalk.

We visited Petrified Forest on two separate days on our way to/from Scottsdale, which allowed us to spend time in several different areas of the park.  The 28-mile Petrified Forest Road connects the north and south entrances and their respective visitor centers with a handful of sites, viewpoints and trails easily accessible from the road.  Beginning our journey in the north after the Painted Desert Visitor Center, we drove along the winding road overlooking the red hills of the Painted Desert.  Here you’ll also find the old Painted Desert Inn, a historic inn turned museum.  Just before you cross over I-40 be sure to stop at the Route 66 Alignment where you can take photo with the remains of a 1932 Studebaker marking the spot where the iconic highway once ran through the park.  In fact, the Petrified Forest is the only National Park that contains a section of the historic Route 66.  Driving a little more we passed the Puerco Pueblo and made a stop at Newspaper Rock, a site named for the more than 650 petroglyphs that can be found on the rocks here. 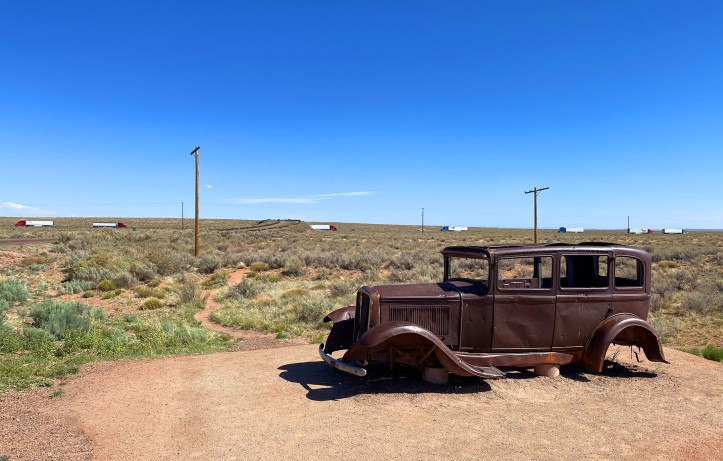 Next, just past the Tepees on your right be sure to keep an eye out for a pull out on the left.  This is where the unmaintained Blue Forest trail starts along the remnants of an old 1930s road built by the Civilian Conservation Corps (CCC) until the more popular Blue Mesa loop trail (1 mile) was established in 1955.  The Blue Forest Trail is roughly 3 miles round trip and winds through colorful badland hills in shades of white, gray, purple and indigo blue.  Traverse across old gravel road that loosely marks the path along the dry, cracked earth to climb these hills for incredible views of the barren wasteland below.

From here we continued along the road to the Jasper Forest, which was one of our favorite areas in the park.  The unmarked trail begins from the stone steps on the right side of the overlook and is roughly about 2.5 miles round trip.  We found ourselves wandering through this area with sandstone boulders and tons of rainbow colored rocks and logs in various forms of petrification – the largest collection in the park.  Some still resembled actual wood while others revealed their crystalized interiors (and as my 4-year-old continued to remind us, “it’s like a rock and wood together!”).  This was an especially fun place to explore with no one else around.

Afterwards we visited the Crystal Forest (1 mile loop) and honestly were a bit underwhelmed with the petrified wood along this paved trail after the impressive collection we saw in the Jasper Forest.  In the southern portion of the park there’s also the 110-foot long Agate Bridge and trails to the Agate House (2 miles) and Long Logs (1.6 miles, can be combined with the Agate House for 2.6 miles round trip), which we decided to skip.  Instead we made our last stop at Giant Logs (0.4 miles), a short trail behind the Rainbow Forest Museum & Visitor Center where you’ll find a log that’s nearly 10-feet wide at its based nicknamed “Old Faithful”   The museum is also a fun pit stop with its small collection of paleontological exhibits. 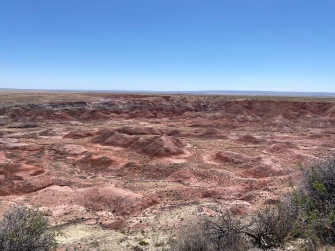 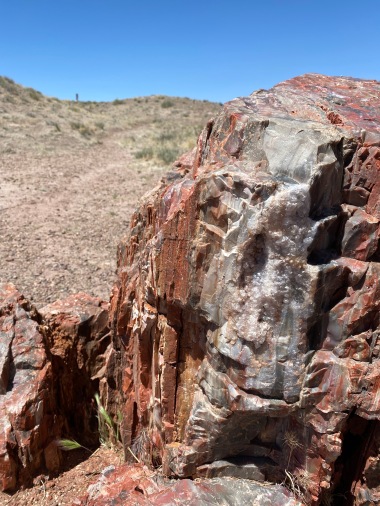 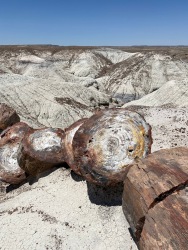 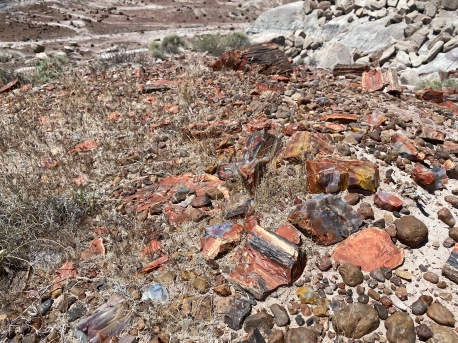 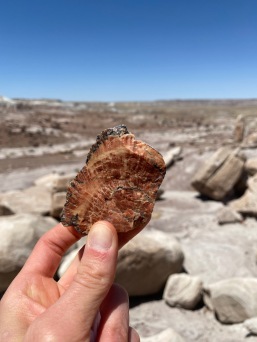 Also Good to Know
Petrified Forest National Park sits between I-40 and Highway 180 and the entrance you choose depends on what direction you are traveling from.  There are visitor centers at both entrances (although better facilities at the Painted Desert Visitor Center in the north), which are connected by the park’s main road.  In a hot, desert environment it goes without saying that you should be prepared with plenty of water and sun protection.  Shade is virtually nonexistent so start your hikes early, especially in the summer months.  And most importantly, do not take any rocks, fossils or petrified wood from the park as you can be subject to a fine.  If you must bring home a souvenir from your visit, there are many places outside of the park that sell petrified wood (watch for signs, you can’t miss them).

PETRIFIED FOREST BY THE NUMBERS