5 Interesting Facts About the Paris Opera

Considering the average lifespan of a theatre in the 19th century was 13 years because of the likelihood of a fire, it’s amazing that the Palais Garnier is still standing 150 years later.  Named after its architect Charles Garnier, Paris’ jewel box of an opera house sits proudly atop Avenue de l’Opera in the 9th arrondissement, anchoring the bustling boulevard like a temple to the arts.  While its scrumptious exterior is enough to make anyone passing by stop in their tracks, its interior rivals even that of Versailles.  This was very much intentional as the opera was the place to see and be seen (and I’m not talking about the actual show).  Men and women, young and old alike had a role to play as actors of the public space, and the Palais Garnier was designed as such. 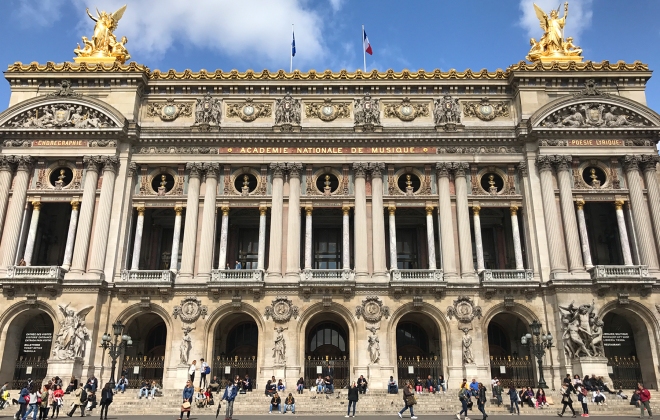 While a visit will give you a small glimpse inside this world, I learned that there’s a certain richness that only a guided tour can provide – including access to the nearly 2,000-seat auditorium that’s draped in red (because it was believed women looked more beautiful on red) and gilded in gold (naturally), set under a glittering chandelier and Chagall’s (controversial) painted ceiling.  Rather than divulging all of the Palais Garnier’s secrets, here are 5 of my favorite facts about its fascinating history.

1. The opera house was built for Napoleon III but he never actually attended.
Following an assassination attempt at the Salle Le Peletier in 1858, Napoleon’s security and comfort were a priority when conceiving the new Palais Garnier.  Such features included a separate entrance and special box for the emperor.  Even the Avenue de l’Opera was designed as a straight line from the Louvre where Napoleon lived to the theatre, knocking down everything in between to make way for the new road.  But thanks to Franco-Prussian War, Napoleon was ousted and sent into exile until his death in 1873, two years before the completion of the Palais Garnier in 1875.

2. Its interior is decorated with 30 types of marble from 8 different countries.
Despite being best friends with Gustave Eiffel, Garnier hated iron and covered the grand staircase area with marble to mask the metal.  He spared no expense in public spaces like this (the balconies, the chandeliers and all of those mirrors for one last look before entering the theatre) and the hall-of mirrors-esque grand foyer.  It was all part of the show, after all.  Yet it’s interesting to note that only 2.5 kilos of gold was used in the entire building. 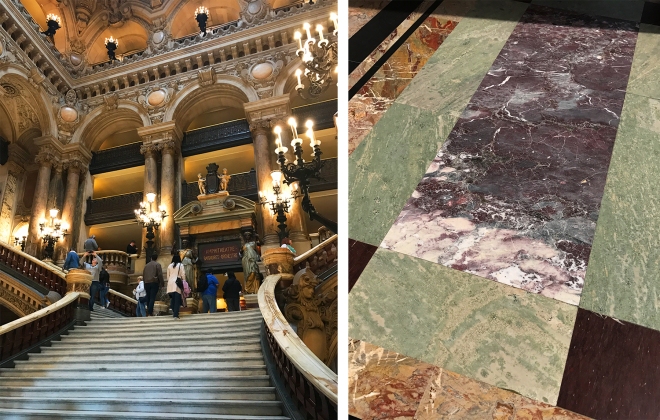 3. The Palais Garnier inspired the Phantom of the Opera.
Rooted is both fact and fiction, the opera house provides the setting for Gaston Leroux’s 1910 novel The Phantom of the Opera and subsequent works including Andrew Lloyd Webber’s 1986 musical of the same name.  While partially extrapolated from historical events, it’s safe to assume that the Palais Garnier is not actually haunted.  For example, water had to be pumped from the site before laying the foundation and a cistern was constructed below the theatre to house excess water (fact), which is very different than the subterranean underworld portrayed in the novel (fiction).  However, if you want to err on the safe side, be sure to avoid purchasing tickets for box number 5 as that box was specifically reserved for the Phantom.

4. Garnier bought his own ticket on opening night.
If you build it they will come…maybe.  Garnier must have been nervous about the reception his newly completed project would receive in 1875, but had nothing to fear as the opening ceremony attracted prestigious individuals including the President of France’s new Republic, the Lord Mayor of London and King Alfonso XII of Spain. 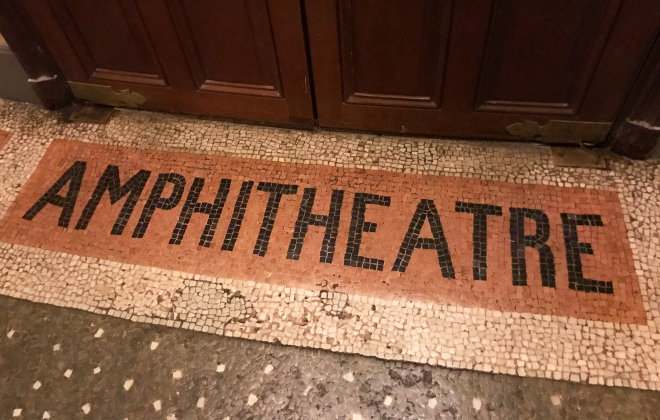 5. The Palais Garnier was never actually finished.
Despite its opulent interior and credit as having the largest stage in Europe (measuring 52 meters wide by 62 meters high – so big it could fit the Arc de Triomphe inside), some areas of the Palais Garnier were left unfinished.  Simply put, they ran out of money.  This is a bit of a paradox considering it was the most expensive building built during its time, costing more than 7 million francs.  In today’s dollars that would translate to 313 million euros, which is actually less than it cost to build Paris’ modern 2,700-seat Opera Bastille in 1989 with a price tag of 460 million euros.