Sometimes quick getaways are the best getaways – less planning, less time commitment and (hopefully) less catch up when you return.  I’m glad to have been able to sneak in one more mini trip before the end of 2017 to Durango in southwestern Colorado.  The city is a huge draw for its outdoor recreation, especially in the winter, but warmer temperatures meant little to no snow for the area and activities like skiing and snowshoeing.  Rather than being disappointed, we decided to seek out two great hikes on either end of the trip with one night in Durango in between.  Here’s a snapshot of our quick visit, which ended up being just what we needed post-holiday while leaving plenty of reason to return again soon.  And the best part is this itinerary could be fitting for almost any time of year.

5:00 pm – Main Avenue
We got to town late in the afternoon since we spent the day hiking around sandstone arches in northern New Mexico. After checking in at the Best Western Plus Rio Grande Inn we realized how hungry we were so set out in search of food.  The hotel’s location was perfect for our one-night stay as it was within walking distance of Main Avenue and the Durango & Silverton Narrow Gauge Railroad  It’s one of the most popular attractions in the area year-round, especially in the fall as the leaves begin to turn and around the holidays when the train transforms into the Polar Express.  As we approached the station, we were just in time to watch the adorable kids in their pajamas board the train for a special journey to the North Pole.  Most shops on Main Avenue were closed at this point, but it was nice to stretch our legs and walk up and down the street before dinner, scoping out places to return to the next day. 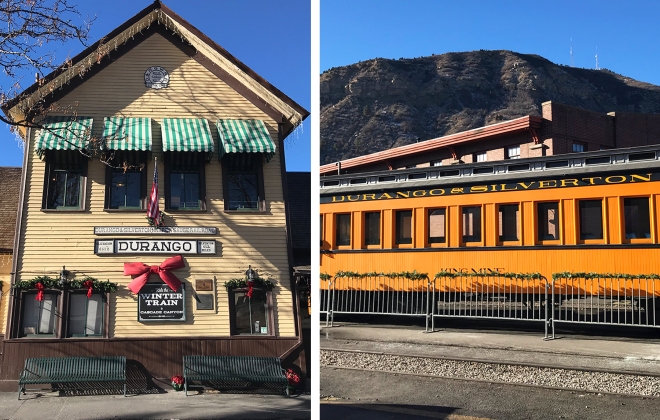 7:00 pm – Dinner
The majority of dining options in Durango are located along Main Avenue and I highly recommend making reservations in advance (we did not do this since we didn’t know what time we would get into town).  There’s a good variety of options too depending on what you’re looking for, ranging from casual spots like Steamworks Brewing Company, The Irish Embassy Pub, Fired Up Artisan Pizza and Mountain Taco & Tequila to more upscale places like Ken & Sue (Asian fusion), Seasons (modern American) and Ore House (old-style steakhouse).  There’s also a new food truck-style collective eatery called the 11th Street Station, which attracted quite the crowd enjoying the live music despite the cold.  We ultimately decided on Eolus Bar & Dining after encountering a local couple on the street who claimed it was the best restaurant in town.  Sold.  We were hungry and the wait wasn’t terrible long, and the nice thing about the restaurant was that they would text us when the table was nearly ready so that we could leave and walk around until then (and also text them if we changed our mind).

Named after the nearby Mt. Eolus, the restaurant’s menu is deeply rooted in locally-sourced ingredients.  We found the atmosphere to be cozy and inviting and the service warm and friendly.  Shortly after settling into our table our waitress appeared to take our beverage order.  We selected a local earthy red blend, which arrived with a basket of warm salty bread.  Our meal began with salads, ordering both the warm beet and organic mixed greens, followed by the grilled hanger steak and the surf and turf entrees.  Both were wonderfully flavorful and perfectly prepared. 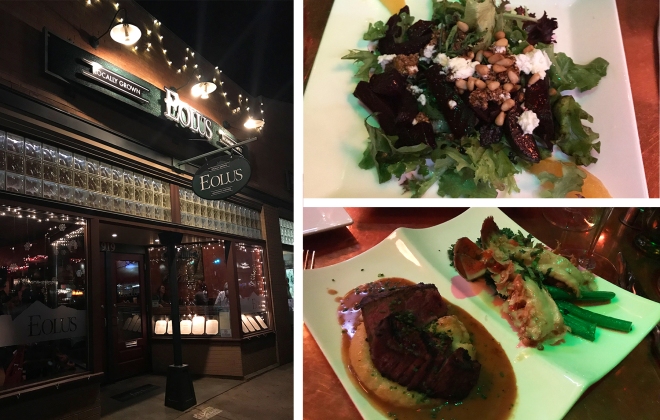 9:00 pm – Drinks and Dessert
After dinner our next stop was El Moro Spirits and Tavern next door.  While its food menu was a little more creative than we were looking for that night, the drink menu at El Moro is one that’s dangerously easy to linger over.  You’ll find inventive cocktails with old-fashioned undertones with name like True Romance (tempting) and Coffin Varnish (not so much).  We decided on a middle ground, choosing the whiskey-based Hattori “Gonzo” Hanzo and the fruity Symmetry.  We also couldn’t resist something sweet and ordered the S’mores, a chocolate mousse pot layered with marshmallow cream and served with house made speculoos cookies for scooping.  We enjoyed our spirits at the end of the long bar and eventually made our way back to the hotel once our glasses were dry.

9:00 am – Breakfast and Window Shopping
The next morning was a leisurely one, allowing the temperatures to warm up a bit before heading outdoors.  We at a small breakfast at our hotel to tide us over and then set out to find a spot on Main Avenue to relax over another coffee, and Jean Pierre Bakery & Wine Bar sounded like the perfect place.  Both a restaurant and bakery, Jean Pierre boasts a cozy interior with wooden tables where you can sit and order a full meal and a walk-up counter to purchase traditional French bakery items to take away.  We patiently waited our turn at the counter and ordered our “usual” – a steamy-hot a café au lait and a chocolate-filled croissant, which we enjoyed at a bistro table outside the front of the restaurant.  I found the service to be a bit slow and the prices a bit high, but it was a nice mid-morning pick-me-up.  Once the shops on Main Avenue were open we spent another hour or so window shopping.  Most have a small, boutique-like feel with a heavy-focus on local products.  One of my favorites was The Market, a kitchen store northeast of the iconic Strater hotel, as well as some of the Old West trading post-style shops. 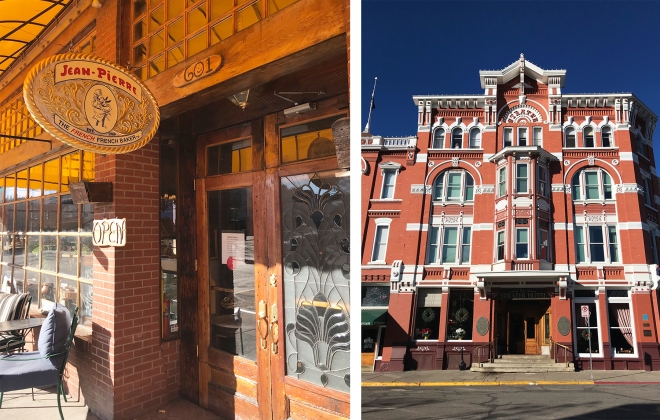 12:00 pm – Cascade Creek Trail
After checking out of our hotel we drove about 30 minutes north of Durango for a hike along the Cascade Creek.  The trail is easy to reach from Downtown, continuing north on 550 just past the Purgatory Resort.  Had there been snow in Durango during our visit we would have been content snowshoeing here, however a mild winter to date made is so we had to head further north and into the mountains to seek out winter weather.  The Cascade Creek Trail is a 6-mile hike through (snow-covered) valleys and forests alongside the (frozen) creek.  It took us about 4 hours round trip, hiking as far as the first (also frozen) waterfall where we stopped to eat a quick lunch before heading back.  You can read more about this hike in detail in my post here, which was a lovely way to conclude our quick trip.