Where to Find the Best Views in Florence 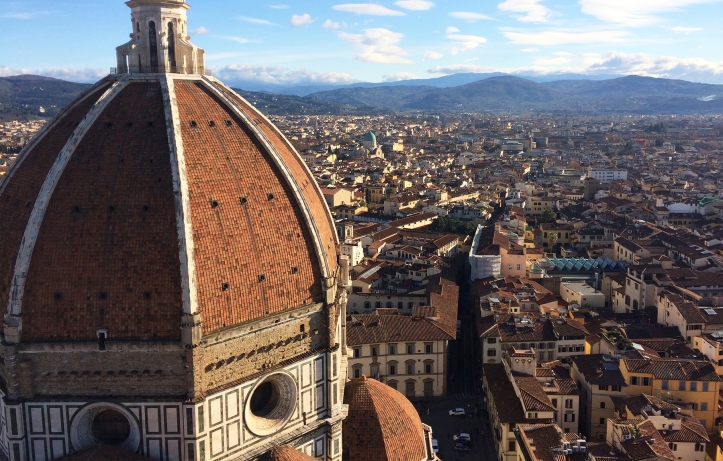 Ahh, Florence…what’s not to love?  A seemingly effortless fusion of unsurpassed art and architecture, delicious gastronomy and some of the most beautiful evening passeggiate you’ll find in Italy.  Its historic core is relatively compact in size yet bursts with so much Renaissance greatness, from Michelangelo’s David to Botticelli’s Birth of Venus and Brunelleschi’s world-famous Duomo atop the Cathedral of Santa Maria del Fiore.

Constructed from 1296 to 1436, the cathedral itself is the third largest in the world (after St. Peter’s in Rome and St. Paul’s in London) and is one of the most sought-after sights in Florence.  Many visitors vie to climb the 463 steps to the top of the dome for an up-close look at its interior frescos and breathtaking 360-degree view of the city’s iconic red rooftops.  I’ve done this twice and after the first time said that it’s quite possibly the best 8 euros you could spend.  Note: You can no longer purchase individual tickets to climb the Duomo and reservations are now required for access.  More information about the cumulative ticket that covers the dome, bell tower, baptistery, museum and crypt can be found here. 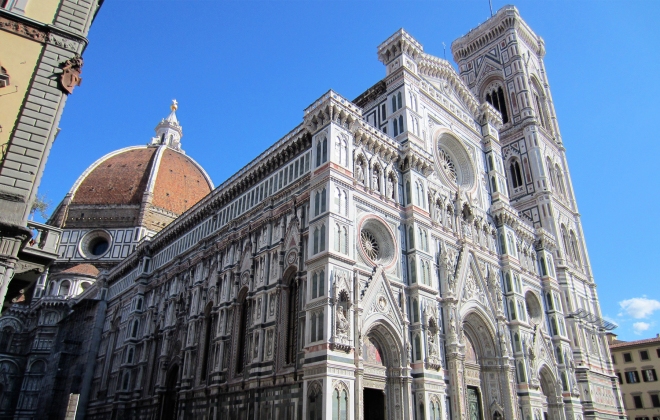 Several years later when I returned to Florence I decided to visit the often overlooked and overshadowed (both literally and figuratively) Campanile.  Designed by architect Giotto, the cathedral’s bell tower has a few less steps and far shorter lines than the Duomo but offers the same sweeping view of the city and pink, green and white Tuscan marble church below.  Yet Campanile climbers are bestowed another reward for their effort – the cathedral’s magnificent dome dominating the view as they ascend to the top.  It was the perfect sunny and mild December day to take in a perfect view that I would not soon forget.

In addition to the Cathedral and its bell tower, also consider a visit to the adjacent Baptistery on Piazza del Duomo, as well as the Opera Duomo Museum (where the baptistery’s original bronze doors are displayed) and Crypt of Santa Reparata – all of which are covered by the cumulative ticket. 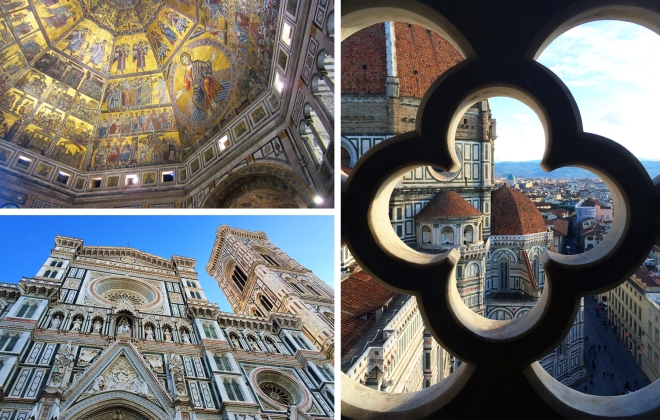 Three other viewpoints in Florence that are worth the climb include:

Duomo
The Cathedral of Santa Maria del Fiore’s iconic red and white dome standing 376 feet above the city of Florence (versus the Campanile’s 278-foot height), which also includes the impressive frescoes of the Last Judgment inside the dome.

Piazzale Michelangelo
The Oltrarno square with a stunning panoramic views of Florence in miniature (it sort of reminds me of the opening scene from Mister Roger’s Neighborhood) from across the Arno River, along with another David statue for your viewing pleasure.