The Pancake Bakery
When in the Netherlands eat Dutch pancakes, and one of the most popular places to do so in Amsterdam is The Pancake Bakery. Located off the Prinsengracht canal in the Jordaan neighborhood and specializes in large (think pizza-sized) pancakes with too-many-to-choose from topping combinations.  Trust me, you’ll have a hard time picking from the laundry list of traditional pancakes (both savory and sweet), house specialties and international pancakes like the French (goat cheese, sun dried tomatoes, pine nuts, thyme and honey) or the Thai (chicken, curry and vegetables).  If you’re a Dutch pancake novice and still wondering what to expect, think of something that’s thicker than a French crêpe but thinner than an American pancake.  The menu also offers a handful of other options including omelets and desserts like mini poffertjes pancakes that can be smothered in toppings ranging from chocolate to cherries and more.  Given its novelty The Pancake Bakery is likely to be crowded, so definitely pack your patience.  The interior is also a bit smoky because of its open central kitchen where all of the delicious pancake magic happens.

Winkel 43
For another Dutch treat, a visit to Winkle 43 should be mandatory.  This little café is famous for its homemade apple pie, which is more cakey in consistency than others we had tried, just the right amount of sweet and topped with a dollop of real whipped cream for good measure.  So how did we know it was worth the indulgence?  By the crowd of people overflowing onto the street, waiting for a coveted table to open up in the small, cozy space.  We were sat next to the dumbwaiter and watched fresh-baked pie after pie emerge, plotting how we could walk out with one or two without anyone noticing.  Our slice finally arrived along with 2 warm café lattes, which was the perfect treat for a cold, gray and drizzly afternoon in Amsterdam.  Of course this would be just as good in warmer weather when you could sit outside on the terrace under the café’s iconic green and white striped awning.  Winkel also has a small menu of soups, snacks and a few select dishes, but let’s be serious, you would be doing yourself a disservice to order anything but the apple pie.

La Perla
I like to seek out pizza at least once in a city and was more than happy with La Perla.  Located on a cute little street that is loosely considered Amsterdam’s “Little Italy”, this stripped down restaurant is directly across from its casual takeout pizzeria.  The dinner menu at La Perla is limited to a few salads, bruschetta and a handful of traditional wood-fired classic and specialty pizzas – more than enough to choose from, especially since the restaurant prides itself in its use of fresh ingredients imported from Italy.  There is also a small selection of wine, spirits (nothing goes better with pizza then a spritz in my opinion) and beer available, including a few choices on tap from Amsterdam’s local IJ brewery.

Portion sizes are generous so we split a mixed salad topped with tomatoes, Kalamata olives, walnuts, capers and parmigiana reggiano cheese, along with a drool-worthy order of bruschetta that was similarly topped with a mountain of buffalo mozzarella, Kalamata olives and arugula before being drizzled with olive oil.  This was just the right amount of food to whet our appetites for the picture-perfect Margherita pizza that followed.  Mission accomplished.

Zorba de Griek
We stumbled upon this restaurant in an area you can easily dub “restaurant row” – with persistent staff perched outside restaurants ranging from BBQ to Italian, flapping their menus in the hopes of enticing those passing by – and chose Zorba because of the lack of any such sales pitch or welcoming committee.  Named after the 1964 movie starring Anthony Quinn, blue and white awnings invite you in to the restaurant’s traditional Greek environment.  The menu overflows with a broad selection of starters and specialty dishes.  If you’re having a hard time deciding what to order (which is quite probably), Zorba offers a reasonable 3-course fixed priced menu as well as an all-you-can-eat Greek tapas (called mezedes) option.

Following the routine we established a few months prior in Greece, we started our meal with an ouzo before ordering a traditional Greek salad and pita bread, chicken souvlaki that was served with fries, rice and tzatziki sauce and a pork gyro that was served deconstructed alongside its pita bread, toppings, a small salad and tzatziki.  We were surprised by the hearty portion sizes and felt like we had ordered almost too much food, which left us more than satisfied and almost too full (we could have done with one less main dish and maybe another starter instead).  We appreciated the laid back, friendly service throughout our meal, and spent some time talking with our waiter afterwards.  A Greek native, we told him about the islands we had visited and he left us with a tip to visit his favorite island Naxos next time.  :)

Foodhallen
Some of my favorite food experiences during my travels have been at food markets, and in Amsterdam one place to check out is Foodhallen.  It’s the first indoor food market in the Netherlands, inspired by other markets around the world like the Torvehallerne in Copenhagen, Mercado de San Miguel in Madrid and the Borough Market in London, occupying an old tram depot just southwest of the canal belt.

Inside the industrial building you’ll find about 20 eclectic eateries wrapped around the perimeter with tables in the middle.  There’s also a handful of bars serving up beverages ranging from beer to spirits (definitely check out the central Gin & Tonic bar with its goblets of beautifully concocted cocktails).  After several laps around we decided on a falafel platter from Maza and a pulled pork sandwich from The Rough Kitchen.  The food was awesome, as was the cool, urban vibe at Foodhallen, which makes it a great place for people of all ages to gather for a quick bite. 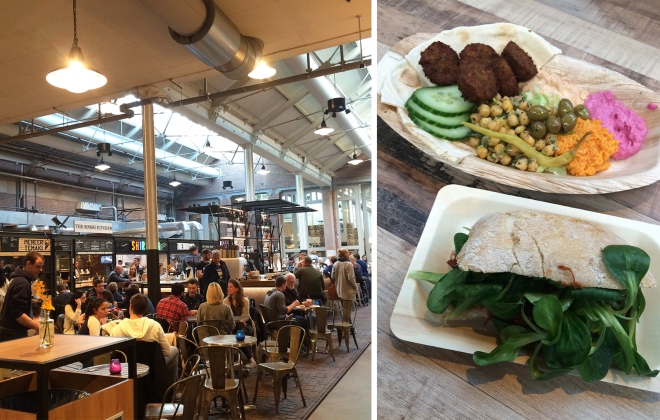 Il Panorama
After visiting the Anne Frank House we were looking for a place to eat that was close and would get us in fast.  We found Il Panorama on the corner of Raadhuisstraat and the Herengracht canal (east of the Anne Frank House and Westerkerk).  It’s the type of place you want to have in your back pocket if you are with a group of people who all want something different as its menu offers a little bit of everything, from pasta and pizza to burgers and steaks.  The service was ok and the food was basic yet reasonably priced.  And despite our lackluster dining experience, we did enjoy our upstairs window table, which offered a great view overlooking the Jordaan neighborhood below.