Marta
I recently met an old New Yorker at a wedding who claimed Marta is the best Roman-style pizza in the city (and the only exception he will make to his no-carb diet).  Shortly after, a friend forwarded me a Condé Nast Traveler video with a similar recommendation from a reputable Rome-based food writer, so obviously we couldn’t pass up the opportunity to investigate these claims ourselves (obviously).  Located in the posh Redbury Hotel near the Flatiron District and Madison Square Park, Marta boasts an equally as posh yet inviting interior where the wood-burning ovens take center stage.  Its menu offers a variety of inventive dishes that put an upscale twist on Italian classics with an emphasis on seasonal and local ingredients, but we were there with a singular focus: pizza.  You’ll also find an extensive all-Italian wine list, along with a decent selection beer and seasonal cocktails like the hard-to-pass-up Spritz 1935 and Bottle-Aged Negroni.

We started off with the Marta Mista salad (which was a little on the small side for 2 people to share) and ordered 2 different pizzas, a traditional Margherita from the pizza rosse selection and the Fiori di Zucca from the piazza bianche section.  Both did not disappoint, with cracker-thin, crispy crust and just the right amount of marinara, mozzarella and basil on one, and the perfect marriage of the salty anchovies, mozzarella and bright yellow zucchini flowers on the other.  Delizioso.  One note, the prices at Marta are a little on the high side, but it recently became a non-tipping restaurant with hospitality included in the costs you see on the menu, which makes it much more reasonable.  It’s definitely a place I would return again for a special (pizza) occasion. 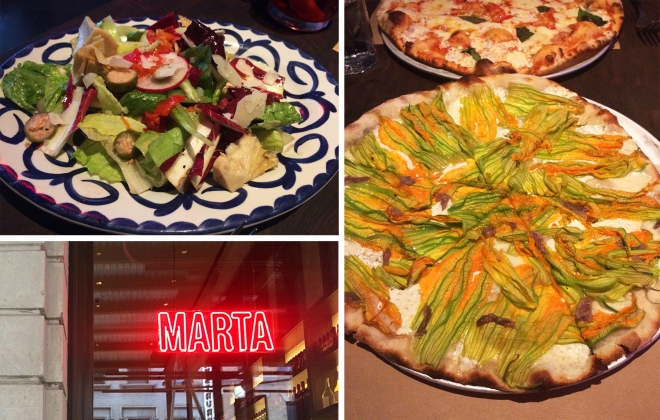 Souvlaki GR
Switching gears from Rome to Mykonos, Souvlaki GR is an unexpected little gem tucked away in Midtown (with another location on the Lower East Side and a food truck around the city during the week).  Step inside through the unassuming blue and white threshold and you’ll feel as if you’ve been transported directly to the famous Greek island thanks to the whitewashed walls and cobblestone streets that emulate the narrow lanes that Mykonos is known for, with more blue accents, pink bougainvillea flowers and lights strung throughout.  A Greek family-owned restaurant (with predominantly Greek staff working the night we were there), Souvlaki GR proudly serves up a broad menu of authentic cuisine, right down to the imported beer and table salt. 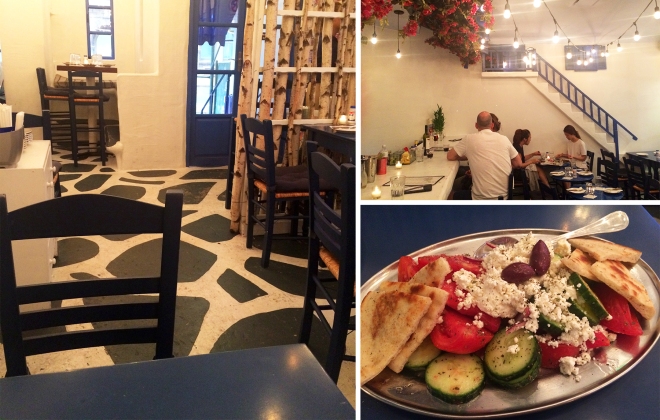 With so many options to choose from, including many of our “favorite” dishes from our time in Greece last year, it was hard to decide what to order.  We started with a traditional Greek salad (Horiatiki) to share along with Greek meatballs (Keftedes) served with tzatziki sauce, chicken and vegetable skewers and the SGR Souvlaki pita filled with beef, tomatoes, red onions, feta, fries and a slightly spicy Tyrokafteri spread.  It was probably as close to the “real thing” as we will find in the States and was almost too much food, leaving no room for dessert or an iced Nescafe Frappé, which is reason enough for me to return.

Bistro Citron
Our time in New York conveniently fell during French Restaurant Week, and in honor of Bastille Day we jumped right in and took advantage of the special menus available at French establishments around the city.  At Bistro Citron on the Upper West Side we were enthusiastically greeted by the manager and seated at a cozy corner table.  The restaurant oozed with bistro charm, from black and white tile on the floor to art nouveau décor adorning the walls.  The prix fixe Restaurant Week menu included an appetizer, entrée and choice of wine or beer, from which I started out with a baby green salad and my husband the charcuterie and cheese platter.  We followed this with the pan roasted pork tenderloin and the herbed grilled salmon, both delicious and true to the restaurant’s French-American cuisine. 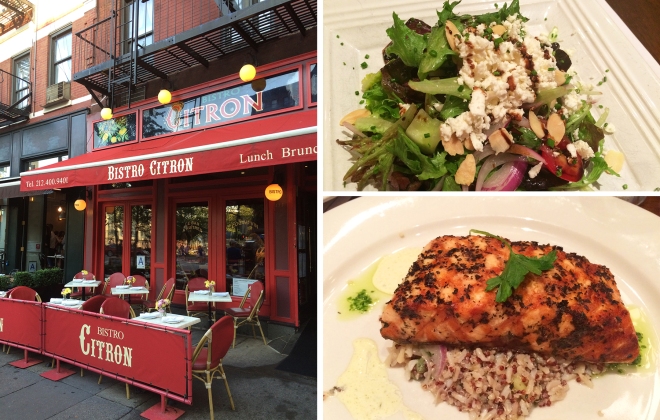 Although just “looking” at the dessert menu was like a twist of the arm that “made” us order the chocolate cake with pretzel crumb and salted caramel gelato.  It seemed like it took forever for our dessert to arrive, to which I joked “did they have to make it from scratch?”  The answer being yes, as the lava-like cake arrived warm right out of the oven with a warm gooey center that escaped as we pierced it with our spoons – perfect for devouring with the cold, creamy gelato that accompanied it.  The moral of the story? Good things come to those who wait and definitely don’t plan on skipping dessert at Bistro Citron.

P.J. Clarke’s
New York is a city filled with historic places, and one of those “old school” spots that has withstood the test of time is P.J. Clarke’s.  Although there are now a total of 6 locations throughout the city, the original red brick building on the corner of 3rd and 55th has been around since 1884.  Over the years it’s attracted the who’s who of New York, from Jackie Kennedy to Frank Sinatra, Buddy Holly, Nat King Cole among other Hollywood types while still maintaining a laid-back neighborhood vibe (you can read stories about some of these famous faces on their website – if only the walls could talk…).  No doubt P.J. Clarke’s is one of the oldest bars in New York and also claims to have one of the best burgers in the city, so with more than a century of history and superlatives like that it’s a place you definitely have to check out.

The inside is a traditional as traditional gets – think red and white checkered tablecloths, wood paneling and old photos and newspaper clippings adorning the walls.  The menu is equally as traditional and given all of the buildup one naturally has to try a burger.  We went with the Clarke Burger, which was simply topped with beef steak tomatoes, American cheese, lettuce and bread and butter pickles.  Also amazing was the Four Tomato Greek salad, which was creatively served with chopped heirloom tomatoes, olives and feta, sweet potato fries and a slice of New York cheesecake for dessert.  And when in New York City at a place like P.J. Clarke’s, nothing is more fitting than a classic Manhattan to top it all off.

Bread & Tulips
Years ago in Italian class I fell in love with a movie called Pane e Tulipani (translating to “bread and tulips”).  Fast forward a few years later to when I discovered an Italian restaurant in New York bearing the same name, which I’ve had tucked away on my mental to-dine list ever since.  Another Flatiron District spot just a few blocks away from Marta, this restaurant did indeed up to my anticipation.  The interior of Bread and Tulips is rustic Italian fused with modern chic, making it feel like both a cozy spot you could settle in for a good meal and a nice place to go to for a special occasion.  Its menu brings together a variety of Italian-inspired antipasti, salads, pizza, pasta and other larger dishes.

After some serious carb overload the previous day, I had my sights set on the arugula salad and the housemade meatballs, which were served in a dish of warm marinara sauce and topped with just the right amount of cheese.  My husband ordered the little gem lettuce salad and the pappardelle – thick housemade pasta in a sauce of braised leg of lamb, tomato and parmesan cheese (which I ended up “trying” a good portion of).  The food was delicious, right down to the bread that was cut from big loaves at a large cutting board right behind our table and served with chunky sea salt and olive oil for dipping.  We finished our meal with the pear and almond tart, topped with pomegranate sorbetto.  The warm, friendly service at Bread & Tulips made us feel especially welcomed and taken care of at this restaurant. 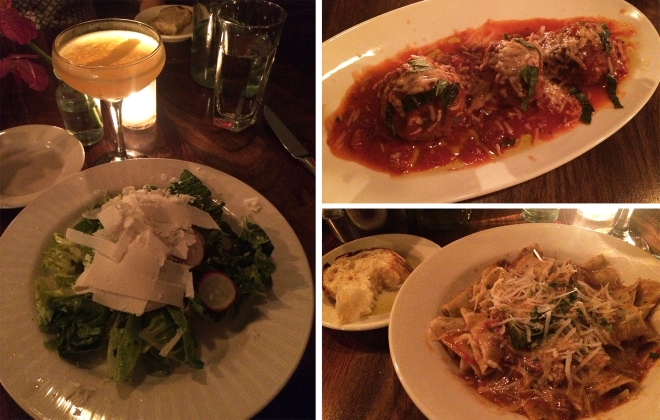