Top 5 Things to See and Do in Paros

The fact that may people don’t know about Paros is probably a good thing.  Think of this Greek island as the unassuming middle sister of glamourous Santorini and fun-loving Mykonos.  Yet Paros isn’t just another beautiful blue and white island in the Cyclades, and its under-the-radar status actually works out to your advantage (translation: less crowds and all of the touristy craziness that comes with it).  Paros is not too big and not too small, which makes it just right.  So if you’re planning a visit to Greece, here are 5 things to see and do that helped make Paros my favorite island.

1. Explore the Narrow Streets of Parikia
If you’re arriving in Paros by ferry, then Parikia will be your first introduction to the island.  This port town has all of the elements of a typical Cycladic village and then some.  Stroll through its maze of whitewashed lanes, bursting with bright pink bougainvillea flowers, equally colorful doors and the more-than-occasional cat.  These cobblestone streets are made for wandering, as well as browsing adorable shops like Aithra for beautiful Greek-inspired jewelry, the quirky concept store Melissa across the street with everything from decorative items to playful accessories and Kamara for antiques and distinctive handmade jewelry, run by Petros and his wife Lydia (who cheerfully made us some custom bracelets on the spot). 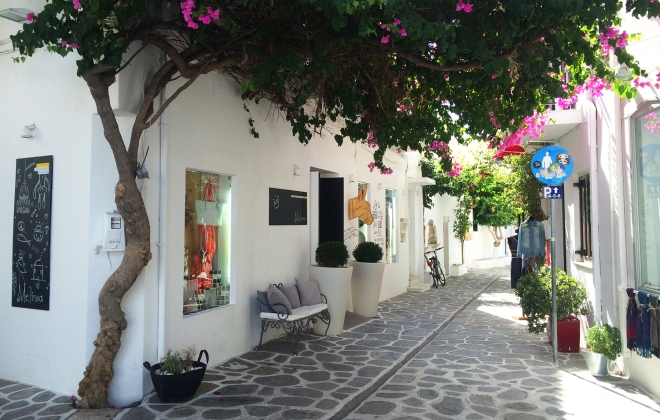 You’ll also find a handful of other sights in Parikia including an archeological museum, the remains of the former Frankish Castle built during Venetian rule in the 13th century and the Panagia Ekatontapiliani, known as the Church of 100 Doors.  This Byzantine church was built by Constantine in 328 and its name comes from a legend that 99 of its doors have been found and the 100th will be discovered when Constantinople is Greek again.  The streets will eventually lead you to the main road where you find windmills and a ton of tavernas and cafes lining the waterfront, an area that may appear sleepy during the day as old Greek men gather to sip coffee to pass the time, but comes alive at night as crowds spill out onto the streets.  The island’s main bus station is here too just west of the port (weekly schedules are posted online and at the little yellow and white kiosk), making Parikia a convent home base.  We stayed at the adorable Panorama Hotel about a 15 minute walk from the port. 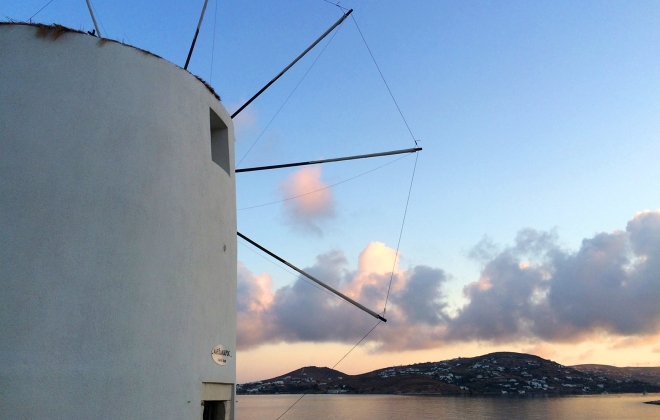 2. Indulge in Seafood in Naoussa
For at least one meal head north to the charming fishing village of Naoussa.  Picture-perfect tavernas with outdoor seating line the harbor and the fresh catches of the day are on full display.  It’s particularly nice in the evenings when the golden sunset washes over the docked boats and ruins of a former Venetian fortress.  We ended up eating a little up the road at the lovely Karina All Day Taverna.  The town itself feels slightly more polished than Parikia but boasts the same whitewashed pedestrian streets with restaurants, bars and shops that stay open late – perfect for after dinner browsing.

During the day you can also take a water taxi from the harbor to several nearby beaches including Kolimbithres, Monastiri, Laggeri and Santa Maria for 6 euros round trip.  Naoussa is a 20 minute bus ride from Parikia, which drops you off right in the main square near the bridge.  When you’re ready to return, catch the bus 200 meters up the road at the bus terminal parking lot (just past a playground). 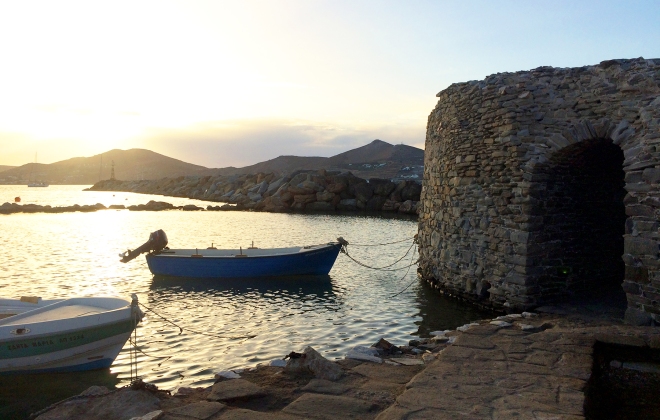 3. Make it a Beach Day, or Two
Most people come to the Greek islands in search of sand and sun and you’ll have no problem finding just that all around Paros.  In addition to the beaches in the north that are assessable via Naoussa, some of the most popular beaches are located along the island’s east coast.  One of my favorites was Logaras Beach (just south of the port town Piso Livadi) with its long stretch of golden sand lined with welcoming tavernas.

Further south you’ll find Pounda Beach, which attracts partygoers day and night thanks to its beach bar/club, and other beaches including New Golden Beach (Tserdakia), Golden Beach (Chrisi Akti), Drios Beach and Lolandonis Beach.  These beaches are well-organized with umbrellas and chairs for rent, and many are also a great spot for water sports like windsurfing, kitesurfing and standup paddling.  Another option would be to take the ferry from Pounta Beach in the west to the neighboring island of Antiparos to seek out some amazing beaches there.

4. Hike the Byzantine Road
If you’re like me and looking to mix things up a bit, then this hike is a great alternative to another day at the beach.  The route begins in the picturesque mountain village of Lefkes, which was once Paros’ capital city thanks to its protected interior location.  More than 1,000 years ago a network of cobblestone roads connected Lefkes with other villages and ports around the island, and today what’s known as the Byzantine Road is the most well-preserved 3.5km (about 2 miles) section of the original path between Lefkes and Prodromos. 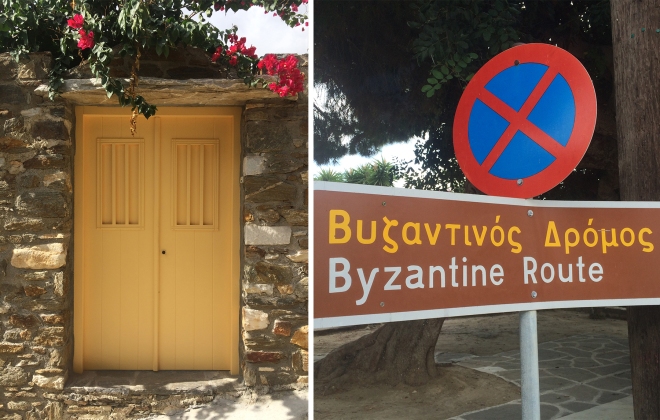 From the bus stop in Lefkes, make your way through the labyrinth of adorable streets, stairways and alleyways, marked with colorful doors overhung with pink bougainvillea flowers, until you reach the village’s main square.  There will be signs pointing towards the “Byzantine Route”, which will eventually lead you to the start of the stone path.  It’s a relatively moderate and peaceful trek (although there is very little shade, so plan accordingly) against a backdrop of blue skies and expansive views of rolling hills, dotted with white villages, olive trees and wild flowers along the way.  We reached Prodromos in just under an hour and continued on about 30 or so minutes more through Marpissa to the port town of Piso Livadi on the east coast, where you’ll find a handful of beachfront tavernas to recharge after this memorable hike.  The total distance covered is about 6.5km (4 miles), which you can see on the map here.

5. Ride a Scooter Around the Island
Even though Paros is well-connected by bus, a fun way to experience the island is on your own two wheels.  In fact, Paros is the perfect place to rent a scooter since the island is less crowded than places like Santorini and Mykonos, and you’ll find lots of rental companies along the main road in Parikia.  We chose John Latsos Motorbike Rental, which cost us 20 euros for an all-day rental.  The transaction was fairly simple since we already had an International Driving Permit (which you can obtain for $15 from AAA).  The guy we worked with also gave us a map, pointing out some of his favorite sites and routes.  You’ll also want to make sure your rental includes helmets and some sort of storage for your bag.

After a quick lesson on how to operate the scooter, we fueled up at a nearby gas station (10 euros worth of fuel was more than enough) and hit the open road.  We visited a few beaches in the north and especially enjoyed zipping around smaller scenic roads through rustic villages, taking advantage of the opportunity to “get lost” and discover some hidden pockets of this beautiful island along the way.