Rambling Down La Rambla in Barcelona

Every visitor to Barcelona will undoubtedly cross La Rambla at least once.  The central street runs from Plaça de Catalunya to the waterfront, dividing the Barri Gotic neighborhood in the east and El Ravel to the west.  Day or night, it’s almost always packed with people, and has an equally as packed history dating back to medieval times.  Here are a few fun facts:

Two other sections – the fashionable Rambla de Catalunya (from Plaça Catalunya north towards Avinguda Diagonal) and Rambla de Mar on the water (from the Columbus Monument towards Port Vell) – are not technically part of La Rambla even though they share the same name and are a natural progression of the street. 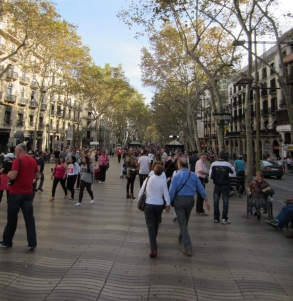 2. The street was originally a sewage bed.  In 1377 construction began to extend the city walls and in 1440 the stream was diverted to run outside of the new walls, eventually drying up.  In fact, ‘Rambla’ comes from the Arabic word meaning ‘dry stream’, and its origins as a waterway are echoed in the rippling pavement design.

La Rambla as we know it today took its shape in the 18th century when the old city walls were torn down and trees were planted along the pedestrian boulevard.  In contrast to the narrow, winding medieval streets of Barcelona, La Rambla was perfect for pedestrian strolling – straight, broad and centrally-located – naturally attracting different classes from around the city.

3. George Orwell wrote about the Spanish Civil War from a hotel on La Rambla.  The English author joined the fight shortly after arriving in Barcelona in 1936, and chronicled his experiences on the warfront in the book Homage to Catalonia.  During his time in the city, Orwell and his wife stayed at Hotel Continental located at La Rambla 138.

The hotel is mentioned several times in the book, and has since paid homage to the author by naming a lounge after him.  Hotel Rivoli is another Civil War-era haunt, having served as a headquarters for the Republicans that Orwell aligned with, and is located down the street from Hotel Continental at La Rambla 128.

4. La Boqueria began as a meat market in medieval times.  The earliest mention of the market dates back to 1217 when tables were installed for traveling peddlers to meat outside the old city gate.  It later became an open air produce market for local farmers, and after the demolition of the city walls and the Sant Joseph convent, the newly created open space laid the groundwork for the present day market. 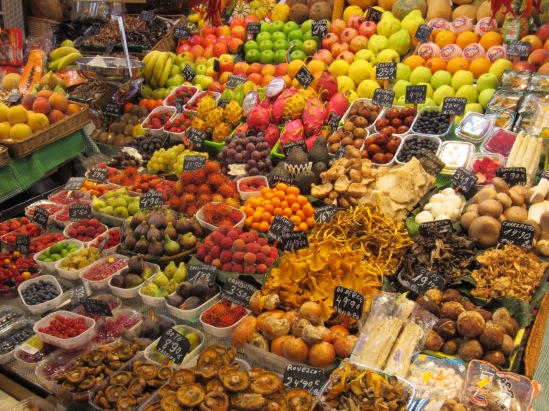 Construction began on March 19, 1840 – St. Joseph’s Day, hence its official name Mercat de Sant Josep de la Boqueria – and the new market was officially inaugurated in 1853.  Over the years, La Boqueria continued to evolve with the installation of gas lamps in 1871, a fish market in 1911 and the metal roof in 1914.

Today La Boqueria boasts more than 250 stalls filled with fresh produce, fish, meat, cheese, spices and other specialty foods as well as small eateries for a light meal or snack.  It’s the perfect place to shop, eat and people-watch for a snapshot into Spanish life.

5. You can see Joan Miró’s work up close and personal on La Rambla.  The abstract artist’s work can be found throughout Barcelona, but thousands of people walk over this colorful mosaic everyday without even knowing it.  Miró designed the circular mosaic near Gran Teatre del Liceu in 1976 when he was 83 years old.  It’s location on the middle of La Rambla is near the Barri Gotic neighborhood where he grew up, and its simplistic design and use of bright primary colors are almost childlike in nature.  Due to all of the heavy foot traffic, the mosaic was recently restored in 2006 just in time for its 30th anniversary.

6. Flower stalls and an open air market for birds and small pets once lined the street.  While remnants of these shops still exist, over the years they have been replaced by more and more newsstands, souvenir kiosks and gelato vendors.  You’ll also find many colorful street performers, artists and pickpockets (so watch your stuff!) all trying to capitalize on the busy, tourist-filled street.

7. The 2 metro stops along La Rambla are part of the oldest line in the network.  The Gran Metro de Barcelona first opened in 1924 (leading up to the 1927 World’s Fair) and the Liceu metro stop opened the following year in 1925.  It draws its name from the nearby Teatre del Liceu and was the first station in the metro network to have a themed decoration, featuring pictures of illuminated leaves from trees planted along La Rambla.

The second metro stop on La Rambla is Drassanes, which is named after the nearby shipyards yards, and was opened decades later in 1968.  Due to its proximity to the water, the metro stop has suffered flooding over the years and was recently rebuilt in 2007.  Today both metro stops are part of the green L3 line, which wraps around the city from Zona Universitària to Trinitat Nova.

8. A 24-foot statue of Christopher Columbus marks the end of La Rambla.  The Columbus Monument, or Mirador de Colom, is 200 feet tall in total and was built for the 1888 World’s Fair.  The bronze statue of Columbus sits atop an ornate Corinthian column heavily decorated with symbolism, notable figures and scenes from his first voyage to America.

The monument commemorates Columbus’ stop in Barcelona after returning from his trip, and is a reminder that the Italian explorer reported to King Ferdinand and Queen Isabella of Spain.  Today visitors can take the tiny elevator to the top for great views of Barcelona. 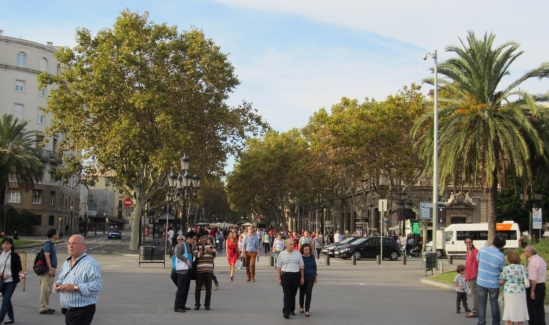 2019 was a year of exploring some incredibly beautiful outdoor destinations, from the jaw dropping scenery of the Scottish Highlands to the otherworldly landscapes of White Sands and lush green forests of Olympic National Park. ⛰ Here’s to a new year and new adventures ahead! ✨#travel #2019 #yearinreview
Hiking in #Durango is always a good time. Today was no exception. 🏔 #spirittrail #colorado #travel
Destination: #NewYork, NY. No place does the holiday season better.✨ . . . . #travel #nyc #ny #holidaylights #saksholiday #5thavenue #igersnyc #wanderlust #afarmag #traveldeeper #passionpassport #tlpicks #tasteintravel #lonelyplanet #tripadvisorpic #huffpostgram #iamatraveler #instatravel #travelgram #instapassport #igtravel #shotoniphone
Victoria Street is one of the most photographed spots in #Edinburgh thanks to its striking curve and colorful shopfronts, which even served as the inspiration for Diagon Alley in the Harry Potter series. From castles to cobbled streets, hidden alleyways and dramatic viewpoints, the Scottish capital is stepped with centuries of charm and intrigue just waiting to be explored. Link in profile to read more in Scotland Part 4: Edinburgh. #travel #victoriastreet #harrypotter
#NYC is one of the best places to be during the holidays and I'm excited to be back there in a few weeks! 🎄 In the spirit of the season, I've shared 8 gift ideas for every type of traveler on your list in my 2019 Holiday #Travel Gift Guide from @myrume, @oontzbycambridgesoundworks, @homesick, @kohiplus, @kingartcompany, @polaroid, @23andMe and more! Link in profile to see the full list. 🎁 #holidays #giftguide #rockefellercenter #christmastree
All aboard! Made famous in the Harry Potter movies, the Glenfinnan Viaduct is an impressive structure consisting of 21 arches that span 1,000 feet long and 100 feet high. If you time your visit right, you just might catch a glimpse of the iconic Jacobite steam train as it passes. 🚂 #travel #scotland #glenfinnan #trainspotting #hogwartsexpress #harrypotter
Just when I thought #Scotland couldn't get any better it rained. It was the first and only day we saw gray skies during our trip and I loved it. With the clouds came the midges (a small price to pay) and by the time we reached Glencoe it was pouring. 🌧️ The wet weather wouldn't dampen our spirits (we didn't bring rain gear all this way for nothing), and in a stroke of luck the rain paused just long enough for our hike. The lush landscape ached with the intensity of every shade of green imaginable, pierced by streams that trickled down the hills of the surrounding valley under the still moody sky. 💚☁️💚 Good things come when you least expect them, although this was the Scotland we had expected (or at least hoped for) all along. Link in profile to read more in Scotland Part 3: Glencoe. #travel
One of the things I loved about driving around the Isle of Skye in #Scotland is how remote it felt. While there may not be any other people in sight, you’re never more than one “call” away from a flock of sheep. ☎️🐑💚 #travel #isleofskye
Another incredible weekend on the sand dunes at White Sands National Monument. This place is pure magic. ✨#travel #whitesands #newmexico