Conquering Ancient Rome on a Bike 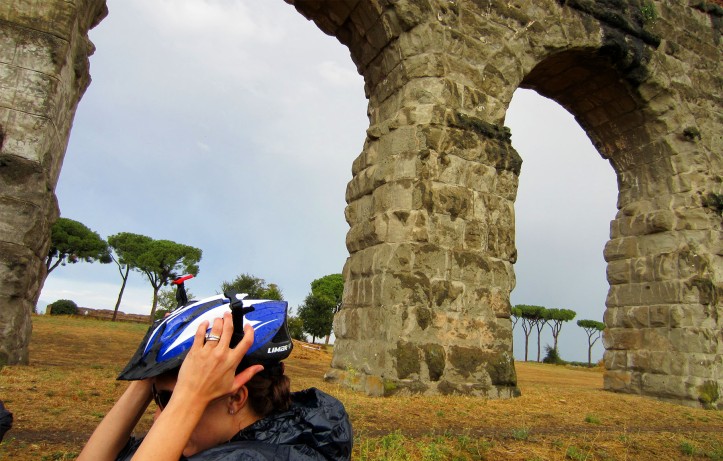 A 6-hour bike trip down the Appian Way to the ancient aqueducts in Rome sounded like a good idea – and an even better excuse to eat an extra serving of gelato (when in Rome, right?) – that is unless you haven’t ridden a bike in 10+ years.

I found this out the hard way, and can tell you from personal experience that the saying “It’s just like riding a bike” is rife with fallacy.  First my seat wasn’t the right height (a minor adjustment), but as my small group of 6 left the bike rental shop, weaving through the hilly, Fiat-filled streets of Rome, I struggled to keep my balance.  I joked, “I’m a runner, I like my feet on the ground,” a statement our guide Bruno did not find much amusement in, responding in a thick Italian accent, “Are you sure you’re going to be able to do this for 6 hours?”

Yes, yes I can (at least I hope so).  With a wicked weave, my 5-year-old self flashed before my eyes, learning how to ride a bike for the first time all over again.  I kept thinking, if my parents were here right now they would be laughing hysterically.

Eventually I began to recall the concept of gear shifting, conjured up some confidence and, dare I say, started to “get the hang of it.”  I finally had command of my light-as-a-feather mountain bike as we rode over the 2,300-year-old cobblestones that make up the Appian Way.

A strategically important road dating back to 312 B.C., Via Appia Antica was the first road built to specifically transport troops to regions outside of Rome.  It eventually stretched more than 350 miles towards the port town of Brindisi, providing Rome with a “gateway to the east.”  The Romans understood the value of a good road system and even better engineering.  The Appian Way was made up of tight interlocking stones to ensure stability and drainage, sized perfectly to accommodate the width of 2 chariots with 2 footpaths on the sides (about 15 feet wide).  Today the road is a cultural park, dotted with the remnants of baths, catacombs and slightly more uneven stones.

As luck would have it, my newfound success was too good to be true, because as soon as we hit the road again after touring the San Callisto Catacombs, it started to rain.  Bruno handed out large black, never-been-used ponchos, which I can equate to little more than an oversized trash bag.  Good thing, because as we turned off towards the Aqueduct Park it started to pour – hard – as if mocking our attempt to stay dry.  The rain was followed by hail and then rain again, and the small windy road became muddy, our sunglasses foggy.   Now riding with “rush hour” traffic, my uncertainty kicked in again.  This is it, I thought, my husband is going to have to tell my parents that I got run over by a Vespa while “biking” in Rome.

The light at the end of the tunnel, or rainbow at the end of the road (literally), was when the rain subsided just as we reached the Parco degli Acquedotti.  Located in the middle of Roman countryside, the park is home to 6 of Rome’s 11 original aqueducts, with a seventh that was added during the Renaissance and is still used for irrigation today. 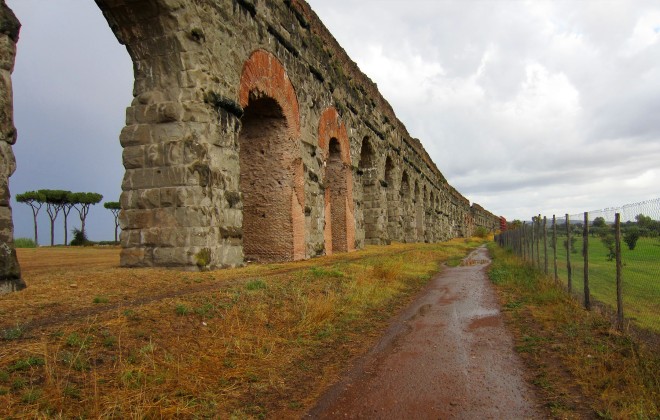 Arguably the most advanced water system in the world, the aqueducts were built to bring in water from far away sources to keep up with Rome’s thriving population.  For more than 850 years, the aqueducts provided clean running water for the city’s many fountains, thermal baths and villas (for the uber fancy Romans), which at its peak was 3,434 gallons per SECOND.

Truly an engineering marvel, the complex system had to keep the right angle of the pipeline while taking into account the varying levels of altitude, from underground to the more than 90 feet tall at its highest point.  Oh, and they had to look pretty too, adhering to the Roman standards of “firmitas, venustas, tilitas” (solidity, beauty and usefulness).

Before heading back to Rome, we stopped at the Azienda Agricola La Caffarella farmhouse for a snack of cheese, bread and wine (i.e. liquid courage).  Anna was the most generous hostess and despite not speaking much English she wrote down the name of her farm so we could look her up on Facebook.

As we reentered the busy city via the Porta San Giovanni, I became even more comfortable with my bike (and its bell), yelling “Mi scusa!” as we fought the throngs of tourists.  Rounding the Colosseum, a nearly full moon anchored the dusk-blue sky in the background, and I was overwhelmed with a huge feeling of accomplishment, to which we celebrated with our new British friends over cold beers and spritz.

You can’t necessarily re-create the pouring rain or marble-sized hail, but you can however experience the grandeur of Ancient Rome on the amazing tour we took with Top Bike Rental & Tours. 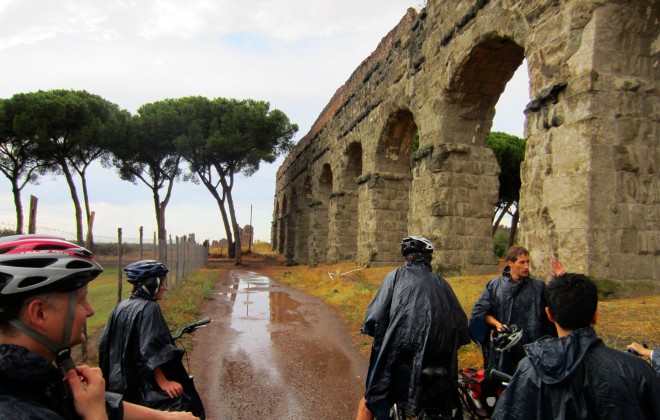