Canyonlands National Park is the very definition of larger than life.  Carved by the elements, the landscape is made up of colorful canyons, dramatic cliffs and other impressive rock formations that create a vast wonderland of rock in the heart of the high desert.  The Colorado and Green rivers divide the park into 4 districts – Island in the Sky, The Needles, The Maze and the rivers themselves – each offering visitors striking scenery and incredible views that will quite literally leave you speechless.  Often overshadowed by nearby Arches National Park, Canyonlands holds its own as the largest park in Utah spanning more than 300,000 acres.  It attracts only about half as many visitors annually as Arches does, making it easier to escape crowds.  Canyonlands truly is a postcard for America’s west, a wild and untamed wilderness of unfathomable proportions. 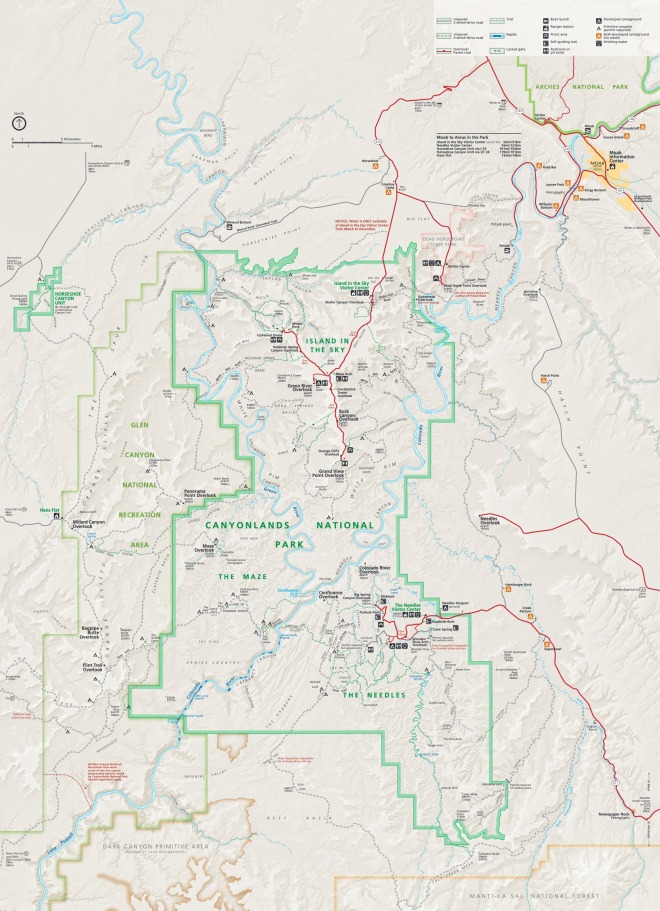 The most accessible district is Island in the Sky, which sits atop a mesa nearly 1,500 feet in the sky between the two rivers, and is where we decided to spend our day.  It’s a 40 minute drive from Moab off highway 313.  As we approached the park it already felt like we were high up in the sky with low hanging clouds moving around us.  Once past the Visitors Center the majority of trailheads and viewpoints are located along the park’s main thoroughfare Grand View Point Road.  Arguably the most popular spot in Canyonlands is Mesa Arch so naturally that’s where we headed first. We followed the easy half-mile loop trail marked by footprints in the snow to the arch which offered a first glimpse of the magnificence that is Canyonlands through its snow-covered opening.  Mesa Arch is best viewed in the early morning when the sunlight illuminates the arch and brings its orange color to life.  While we’re not the earliest birds per se, we briefly had Mesa Arch to ourselves before anyone else arrived. 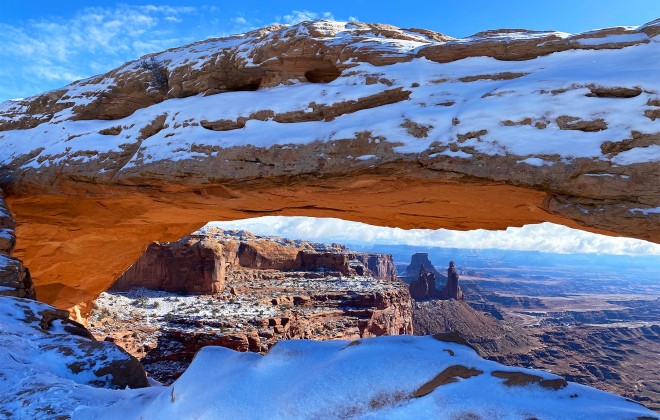 Next we intended to attempt the challenging Gooseberry Trail (5.4 miles), which shares a parking area with the White Rim Overlook and picnic area.  It’s a staggering 1,400-foot descent with steep switchbacks to the rim of the canyon, but the fresh, powdery snow seemed to cover up any semblance of a trail.  And even if we did manage to find the trail, I would have been worried about getting down (and back up) safely, so instead we opted for the White Rim Overlook Trail (1.8 miles).  Again, we had the trail entirely to ourselves and even under the fresh snow, the trail was easy to follow as it took us through a landscape dotted with bold orange rocks, twisted tree branches and the occasional deer prints.  The overlooks at the end of the trail rewarded us with spectacular views in all directions, which were much further and expansive than any photo could ever do justice.  It’s seriously staggering just how vast the area is.

We continued to the end of the park’s main road to the Grand View Point Overlook Trail (2 miles).  The viewpoint near the parking lot is nothing short of grand as its name implies (and perhaps even better than the overlook at the end of the trail) so be to take some time to stop here first.  The trail itself relatively easy and one of the most fun in the park as it travels across smooth sandstone rocks with bushes and trees that have been shaped by wind over time as a result of its location at the edge of the mesa top.  There’s also no shortage of scenic views (notice the theme here?) with canyon rims to the east and red cliffs to the west before you reach the southernmost point of the Island in the Sky District where the trail ends for one last view before turning back.

It was still relatively early in the afternoon so we decided we had time for one more hike before calling it a day.  We headed to the Upheaval Dome Trail (1 mile to first overlook), which is a short but steep climb to view a mysterious crater that is hypothesized to be the result of either a meteorite impact or the collapse of a salt dome.  It’s a geological enigma spanning 2 miles wide that has scientists still debating its origin (I’m going with meteorite).  The trail is marked by rocks, steps and later cairns as you get closer to the first overlook (be careful not to bear left or else you’ll find yourself on the much longer and more strenuous Syncline Loop Trail).  There’s a second overlook a little further out that adds another half mile each way to the hike.  On our way out of the park we made one final stop at the viewpoint across from the Visitors Center for our last glimpse of this gorgeous landscape. 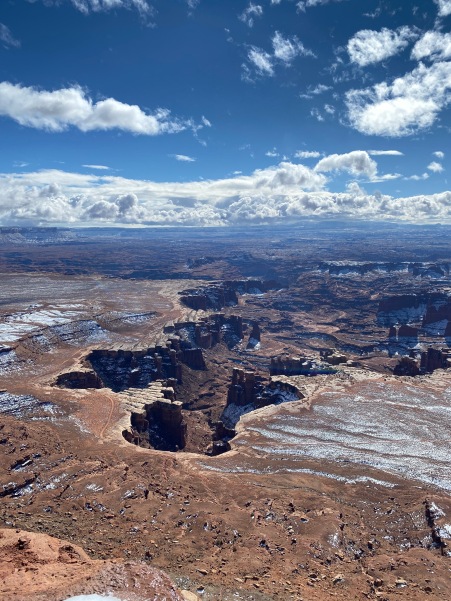 There’s a reason it’s called Island in the Sky

Beautiful scenery along the trail

Taking in the grand view 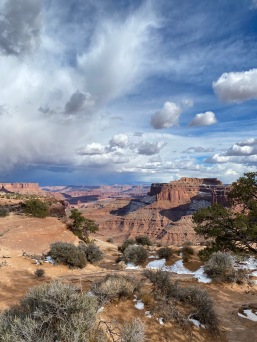 Also Good to Know
It’s a given but worth stating, use caution at overlooks and cliff edges as rocks can be loose or slippery.  In addition, the time of year you visit makes a difference as the Moab region has very hot summers, cool winters and relatively moderate temperatures in the spring and fall.  In general, it’s best to avoid the hottest times of the day during warmer weather, so get an early start and plan your itinerary accordingly.  Water is super important as it’s easy to get dehydrated, even in cooler weather, and there’s no water beyond the Visitors Center.  The sun in the desert can be intense and shade is in short supply on many trails around the park so be sure to protect yourself accordingly with sunscreen, sunglasses, a hat and more recently a face mask, which is mandatory on Federal lands including national parks as of January 2021.  There are tons of other great hiking spots in and around Moab like Arches National Park, Dead Horst Point State Park and others that you can read about in my post 4 Great Hiking Spost in and Around Moab, Utah.

CANYONLANDS BY THE NUMBERS