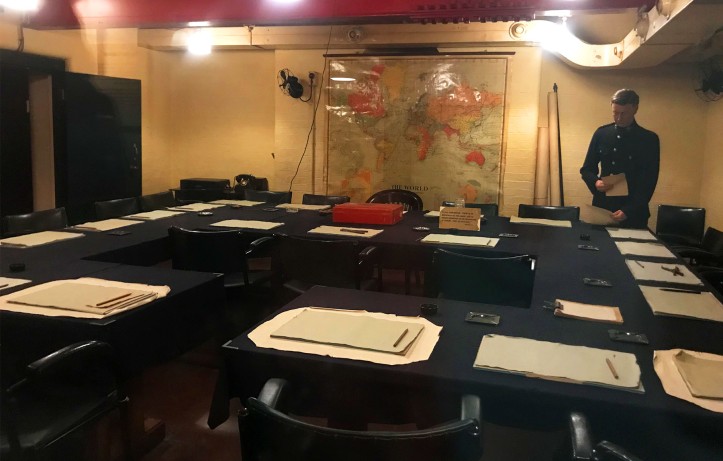 As someone who loves World War II history, the Churchill War Rooms in London was one of those places that I’ve been wanting to visit for years.  I’m not sure if it’s always been super popular or if the 75th anniversary of D-Day in 2019 ignited more interest in the era or if it was because I was visiting during the busy summer travel season, but it seemed like everyone else had the same idea.  Online tickets were sold out weeks in advance and ticket lines spanned around the block, so our only option was to tough it out with the masses.  The good news is a little perseverance paid off and after about an hour or so wait in the morning shade we were finally inside.

The Churchill War Rooms is the site of the underground bunker where Winston Churchill and the British government basically ran the country in secret from 1939 to 1945.  Located beneath the streets of Westminster across from Saint James Park, the space encompasses 27 rooms that served as personal living quarters and a fully functioning command center, which was all but abandoned after the war and not reopened to the public until 1984. 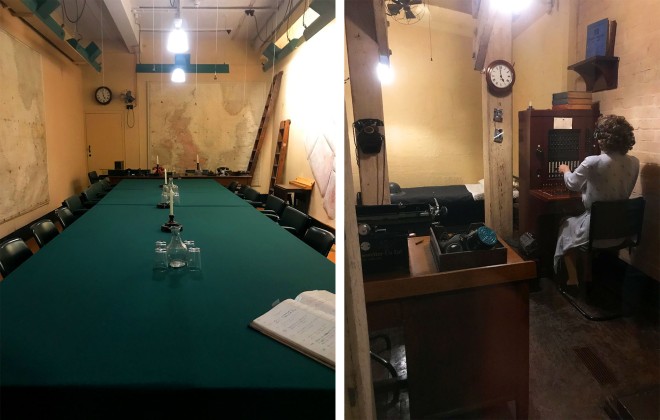 Today it’s a multi-media experience with an included audio tour that guides you through each of the rooms and features stories from people who worked there.  One of my favorite spaces was the Map Room, with visible pinholes in the floor-to-ceiling maps and different colored pins preserved in place to show the movement of troops.  I also was fascinated by little details like sun lamps that were used to counteract long days underground and the weather board sign in the hallway so people knew what was happening outside (for example, windy = bombing).

And despite all of the efforts that went into constructing the space (like discretely pumping in tons of concrete to create a slab up to 5 feet thick), it was only considered bomb resistant – not bomb proof – unknown whether or not it could actually withstand a direct hit.

About half-way through the tour leads you through an interactive museum about Churchill the man, with exhibits that dive into 5 different chapters of his life.  The museum is filled with tons of personal artifacts ranging from Churchill’s childhood toy soldiers to one of his iconic bowler hats.

We ended up spending nearly 3 hours at the Churchill War Rooms, devouring every word there was to read throughout the rooms and museum.  It was amazing to be able to literally step back in time and walk through the space where so many people worked, ate, slept, broke code and strategized while the city above was bombed, and even more amazing to realize how uncertain war really was.  You truly get a first-hand glimpse inside the conflict and the day-to-day operations of the Allied forces who sacrificed their lives for the greater good. 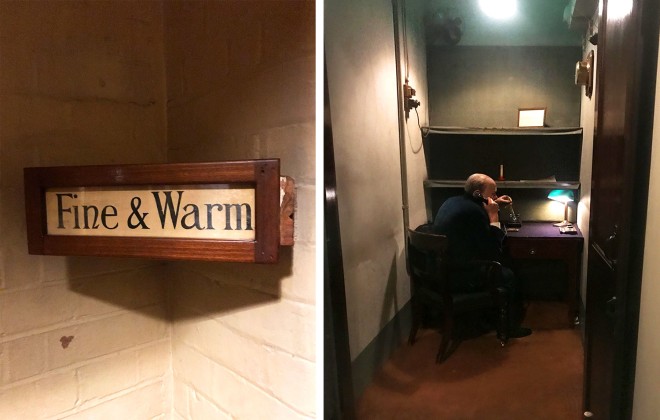