Most people don’t usually think of nature reserves when they think of Italy.  Churches, piazzas and ancient ruins, sure, but not necessary wide open spaces.  That’s what made the Zingaro Nature Reserve so appealing to me when planning my trip to Sicily.  One look at photos of this gorgeous place and I was sold.

Zingaro was established as the first nature reserve in Sicily in 1981 when protesters prevented a road from being built in the area, and today it remains one of the only parts of the island without a coastal road.  Stretching 7 kilometers along northwestern Sicily between Trapani and Palermo, Zingaro is a natural gem in every sense of the word.  Rich with flora and fauna (including more than 700 species of plants, some of which are only found here!), the trail winds through lush landscapes of palms and prickly pear tumbling down rocky cliffs to the jewel-toned sea where you’ll find 7 pebbly beach coves that are perfect for swimming.  It’s a Mediterranean paradise that attracts hikers and beachgoers alike.  Here’s what you need to know to plan your visit to this incredible place.

How to Get There
Zingaro is located off SP63 about 20 minutes from Castellammare del Golfo with entrances near San Vito Lo Capo in the north and Scopello in the south.  Parking is free at both entrances and you’ll pay a small per person fee to enter the reserve.  If you’re coming from farther out, Zingaro is about an hour and a half from Palermo in the east and about an hour from Trapani in the west.  We parked at the southern entrance, which was less than 15 minutes from Casale la Macina where we were staying.  The Visitors Center is located closer to this entrance and there was a small stand in the parking lot selling a selection of beverages, sandwiches, granita and other snacks in case you need to stock up on any last minute items. 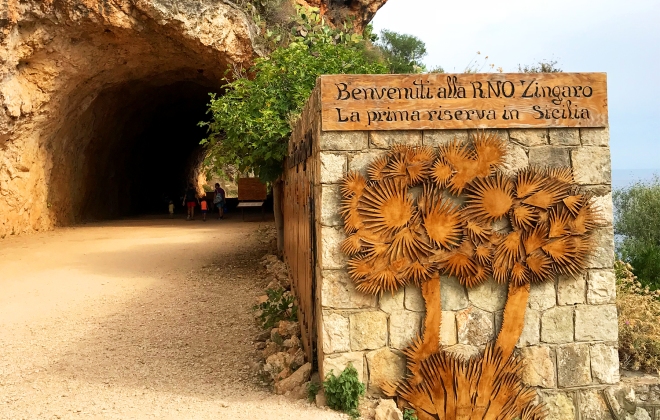 On the Trail
There are 3 main trails with varying degrees of difficulty – an upper, a middle and a lower coastal path.  We chose the latter which is the easiest and most popular because of its access to the 7 beach coves (keep an eye out for the signs that say cala, which means “cove” in Italian) – Cala Capreria, Cala del Varo, Cala della Disa, Cala Berretta, Cala Marinella, Cala dell’Uzzo and Cala Tonnarella dell’Uzzo.  The trail was a mixture of uphill and downhill trekking through colorful surroundings of green foliage, golden rocks and the blue sea below.  There are also a few small “museums”, grottos and offshoot trails along the way, with water and restroom facilities primarily near the entrances.  It might be stating the obvious, but you should definitely be prepared with your own water, good hiking shoes and sun protection as there is very little shade on the trail.  You can download a map for Zingaro here.

It took us about 2 hours to reach the north entrance (figure 4 hours round trip without stops) and I would be lying if I didn’t say it was a good challenge.  By this point we were more than ready to relax and cool off at one of the beaches.  We took our first break at the northern most beach Cala Tonnarella dell’Uzzo, which felt a bit crowded due to its proximity to the north entrance.  A steep set of stairs led down to the large beach area where we staked out a spot on the smooth, white pebbly coastline.

After about an hour we were back on the trail and took another break at Cala Berretta.  It was a smaller, more tranquil cove than the first and the perfect place to wade in the crystal clear water and sun on the large rocks until it was time to make our way back to our car.  Zingaro is nature and beauty in its purest form and was such a memorable part of our time in Sicily.