Torrey Pines State Natural Reserve is the perfect marriage of land and sea.  Its landscape is the result of millions of years of the elements at work, where twisted pine trees cling to golden sandstone cliffs overlooking the majestic ocean.  What makes this place even more special is that it’s one of the only places in the country where the Torrey pine grows (the only other place is a small island off the coast of Santa Barbara).  This tree is so rare that it’s considered an endangered species in the United States.

Centuries ago the Torrey pine was thought to have flourished in the region.  Natives consumed its pine nuts as food and Spanish explorers called the area Punto de Los Arboles (“Point of Trees”) since it served as a reference point for sailors as they navigated the coastline.  Fast forward to the late 1800s when the Torrey pine began to disappear, prompting efforts led by newspaperwoman and philanthropist Ellen Browning Scripps to protect the tree, which later led to the establishment of Torrey Pines State Natural Reserve.  Today the reserve spans 2,000 acres and is home to 300 endangered and protected species of native plants, including the Torrey pine. 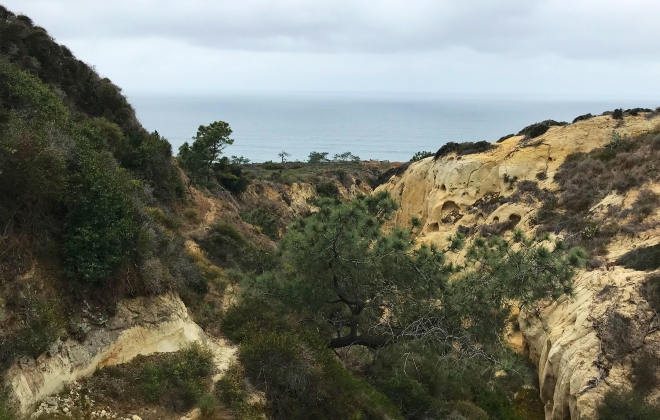 The Torrey pine tree is distinguished by its long needles that come in groups of 5 (whereas other pine species typically only have 3 or 4 needles in a group) and distinctive shape, which is a direct result of the environment.  For example, the trees are shorter and gnarled when exposed to more wind and taller and upright when better sheltered.  There are a collection of easy hiking trails throughout the reserve, most of which are less than a mile with options for all ages and abilities, offering many opportunities to see these trees up close.  The unassuming beauty of Torrey Pines State Natural Reserve is nature at its simplest.  Stripped down, providing an equal sense of calm and wonder.  And if that doesn’t convince you to visit then nothing will.

How to Get There
Torrey Pines State Natural Reserve is located about 16 miles north of Downtown San Diego off Interstate 5 between La Jolla and Del Mar.  In less than a half hour after leaving our hotel we had arrived at the South Beach entrance, paid the attendant the daily fee (which fluctuates based on the day of the week and season) and continued to the parking lot closest to the visitor center.  Several of the trails start here where you’ll also find restroom facilities and a ranger station offering helpful information and trail maps.

On the Trail
The day we visited was mild and overcast and to our delight, there weren’t many other people on the trail.  A park ranger told us that the reserve was not as green as usual as the area was suffering from a bit of a drought this year, coupled with damage from bark beetles.  Despite this, (we’d soon discover that) the reserve was alive with the remnants of spring wildflowers and the gentle roar of the ocean in the distance. 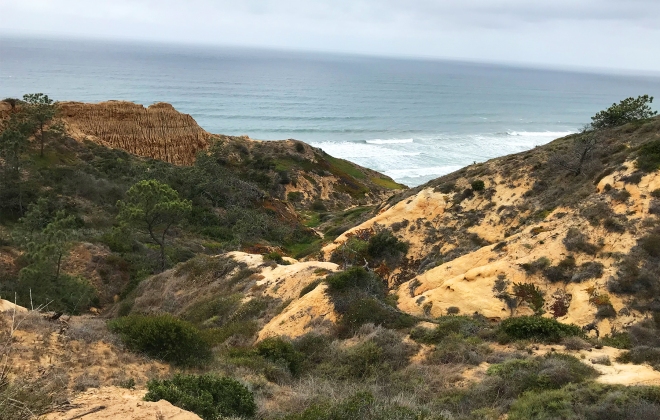 We started out on the Razor Point Trail (0.7 miles), which is appropriately named after the jagged cliffs that jut into the ocean, offering dramatic views of the gorge below as you make your way towards Razor Point.  Next we continued on towards Yucca Point, looping around another overlook dotted with dozens of yucca plants.  From here we were able to connect with the Beach Trail (0.75 miles), which has more of a downhill grade followed by a set of steep stairs to reach the smooth pebbly beach. 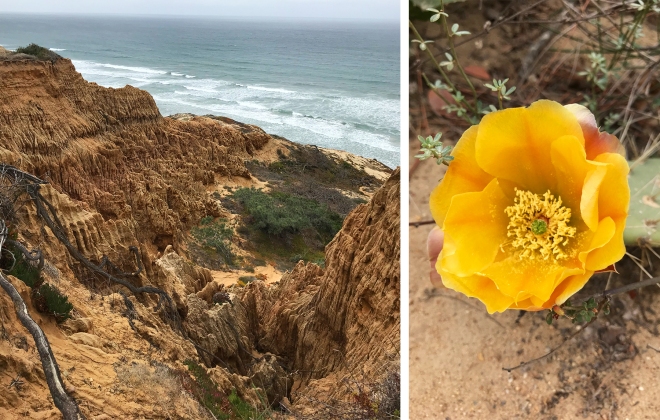 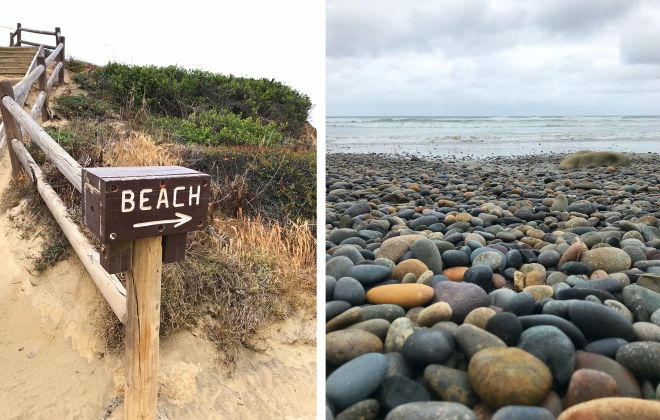 Surrounded by towering cliffs with Flat Rock in the distance, we took in the vastness of the stormy sky and rushing waves before rejoining the trail and hiking back to the parking lot.  This scene –  a raw sliver of the powerful forces of nature that have shaped this area for centuries – was the perfect way to end our hike at Torrey Pines, leaving us with much anticipation of returning again in the future. 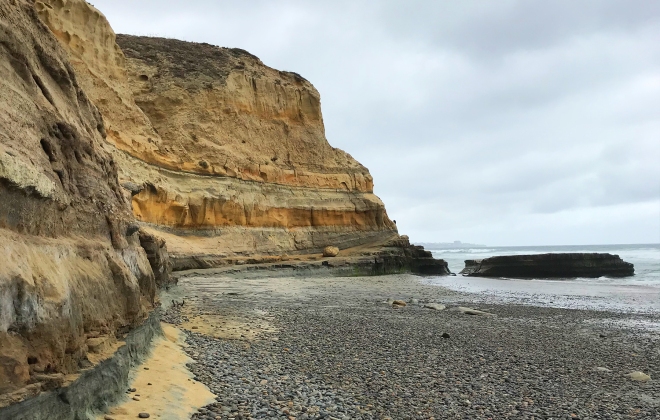 It's hard to imagine London without its iconic Underground but before the Tube there was the horse-drawn Omnibus. The London Transport Museum is an incredibly fascinating place to travel through the past, present and future of public transportation in the city. 🚇 Link in profile to read more in my latest blog post. #travel #london #trainspotting
2019 was a year of exploring some incredibly beautiful outdoor destinations, from the jaw dropping scenery of the Scottish Highlands to the otherworldly landscapes of White Sands and lush green forests of Olympic National Park. ⛰ Here’s to a new year and new adventures ahead! ✨#travel #2019 #yearinreview
Hiking in #Durango is always a good time. Today was no exception. 🏔 #spirittrail #colorado #travel
Destination: #NewYork, NY. No place does the holiday season better.✨ . . . . #travel #nyc #ny #holidaylights #saksholiday #5thavenue #igersnyc #wanderlust #afarmag #traveldeeper #passionpassport #tlpicks #tasteintravel #lonelyplanet #tripadvisorpic #huffpostgram #iamatraveler #instatravel #travelgram #instapassport #igtravel #shotoniphone
Victoria Street is one of the most photographed spots in #Edinburgh thanks to its striking curve and colorful shopfronts, which even served as the inspiration for Diagon Alley in the Harry Potter series. From castles to cobbled streets, hidden alleyways and dramatic viewpoints, the Scottish capital is stepped with centuries of charm and intrigue just waiting to be explored. Link in profile to read more in Scotland Part 4: Edinburgh. #travel #victoriastreet #harrypotter
#NYC is one of the best places to be during the holidays and I'm excited to be back there in a few weeks! 🎄 In the spirit of the season, I've shared 8 gift ideas for every type of traveler on your list in my 2019 Holiday #Travel Gift Guide from @myrume, @oontzbycambridgesoundworks, @homesick, @kohiplus, @kingartcompany, @polaroid, @23andMe and more! Link in profile to see the full list. 🎁 #holidays #giftguide #rockefellercenter #christmastree
All aboard! Made famous in the Harry Potter movies, the Glenfinnan Viaduct is an impressive structure consisting of 21 arches that span 1,000 feet long and 100 feet high. If you time your visit right, you just might catch a glimpse of the iconic Jacobite steam train as it passes. 🚂 #travel #scotland #glenfinnan #trainspotting #hogwartsexpress #harrypotter
Just when I thought #Scotland couldn't get any better it rained. It was the first and only day we saw gray skies during our trip and I loved it. With the clouds came the midges (a small price to pay) and by the time we reached Glencoe it was pouring. 🌧️ The wet weather wouldn't dampen our spirits (we didn't bring rain gear all this way for nothing), and in a stroke of luck the rain paused just long enough for our hike. The lush landscape ached with the intensity of every shade of green imaginable, pierced by streams that trickled down the hills of the surrounding valley under the still moody sky. 💚☁️💚 Good things come when you least expect them, although this was the Scotland we had expected (or at least hoped for) all along. Link in profile to read more in Scotland Part 3: Glencoe. #travel
One of the things I loved about driving around the Isle of Skye in #Scotland is how remote it felt. While there may not be any other people in sight, you’re never more than one “call” away from a flock of sheep. ☎️🐑💚 #travel #isleofskye